We use a never-seen-before dataset to examine the impact word density has on the effectiveness of audio advertising.

What is the perfect word rate for an audio ad?

TL:DR - Audio ads that hit the perfect word rate per minute enhance their ability to stand out creatively, which in turn increases campaign web response.

Colourtext has taken this never-before-seen dataset and analysed it to discover new insights into the quality and effectiveness of audio advertising. We crunched the numbers for over 10,000 campaigns broadcast between 2019 and 2021, which included activity for 615 national brands across 22 advertiser categories using over 13,000 pieces of audio ad copy. Uniquely, Audiotrack has also text-transcribed approximately 70% of these advertisements, which has yielded new campaign data points that have proved to be incredibly useful.

The standout finding of our study has been the impact of word rate, or word density (expressed as words-per-minute (wpm)), on the effectiveness of audio ads. We anticipate this will change the way brands think about the role of audio advertising and how it is created.

Our data revealed the average number of words per minute used in audio commercials is 169. This can vary widely from just 155 wpm in the Food & Drink sector, to 180 wpm on average for Financial brands. We wanted to know if there was an optimum word density rate. 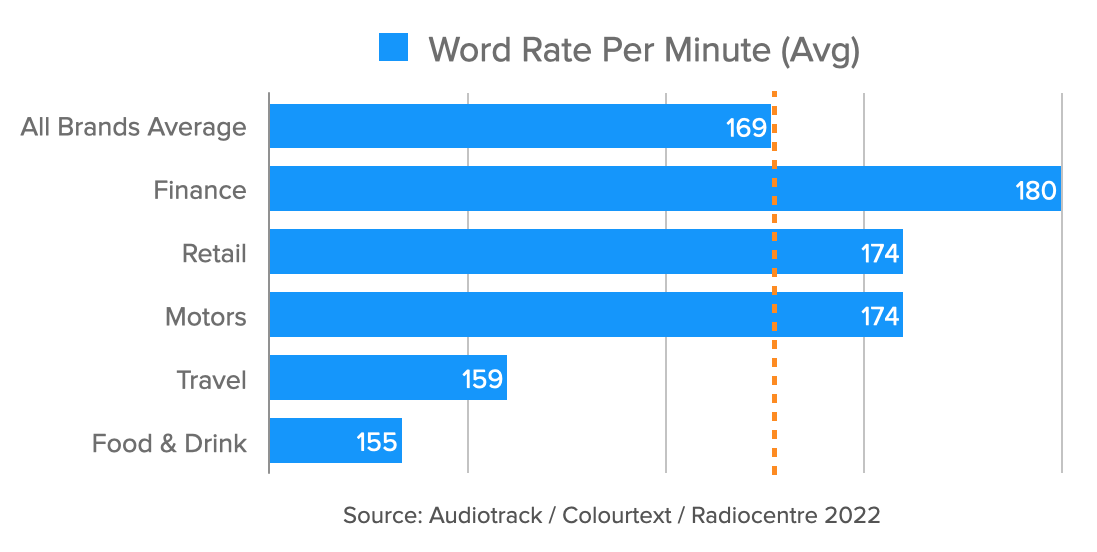 Surprisingly, there is very little evidenced information available to guide either brands or advertising creatives on this issue. The best data we found was within the context of effective public speaking, as illustrated by the chart below that shows average word rates per minute for a range of speech-orientated contexts.

To examine the impact of word density we fused the Audiotrack database with Big Audio Datamine, Radiocentre's massive archive of 1000 Radiogauge advertising effectiveness studies conducted in the UK (disclaimer - Colourtext built the Big Audio Datamine on behalf of Radiocentre). We found 22 transcribed radio campaigns aired between 2020 and 2022 that are common to both datasets. Based on data from these campaigns we analysed the relationship between word density and audio advertising effectiveness.

Radiogauge campaign evaluation studies measure a wide range of brand equity and advertising creative diagnostics. Using regression analysis to examine each variable we discovered that Creative Standout is the metric that's most sensitive to variations in word count. 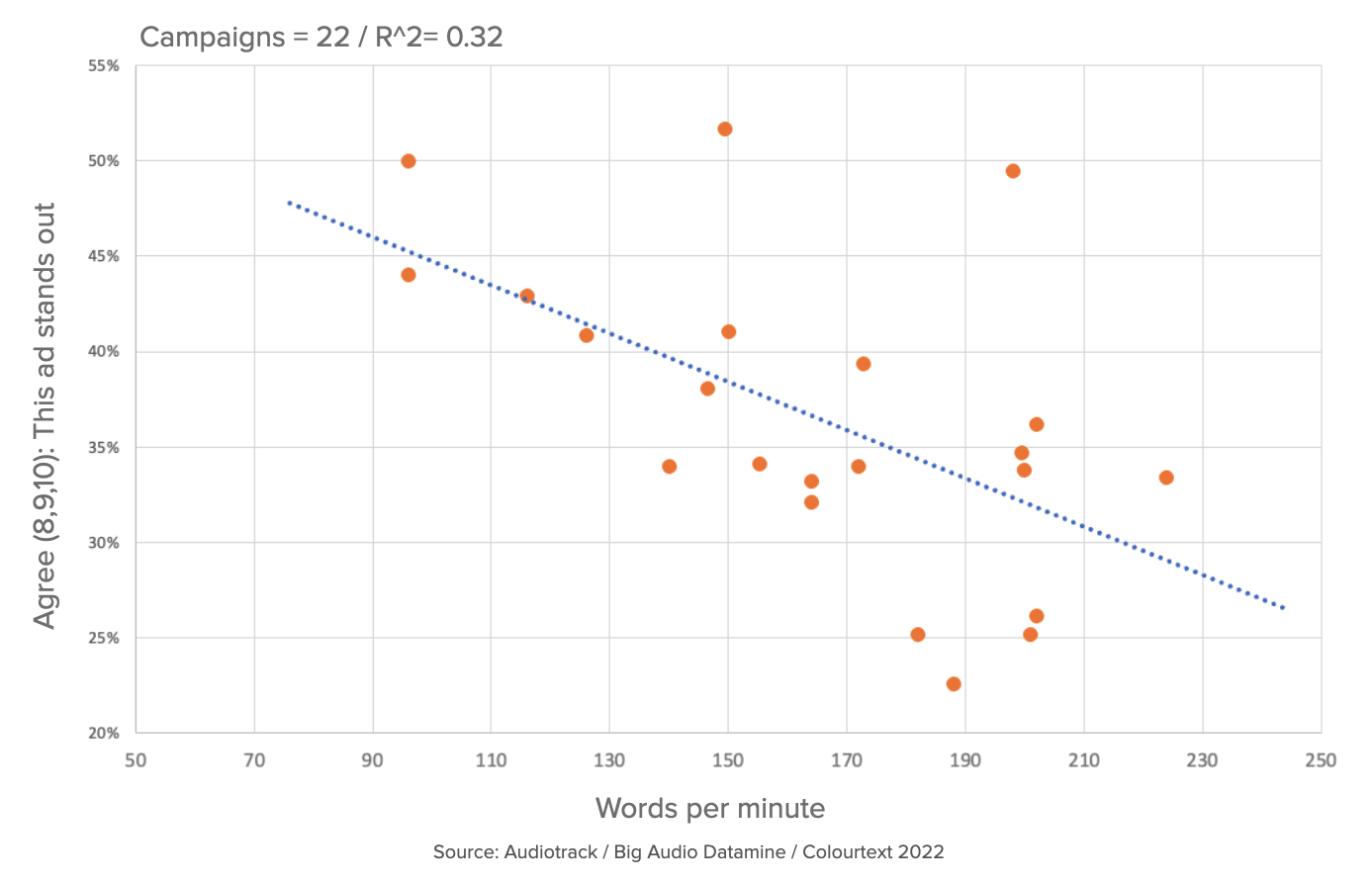 This scatterplot illustrates that as the word density (measured as words-per-minute) of an audio ad increases its creative standout, as perceived by listeners, falls. This model explains 32% of the variance in an audio ad's creative standout score, which in practical terms means that for every 10 extra words per minute we hear in an ad Creative Standout can be expected to fall by 1%.

The obvious next question is, does this matter? Should we care that an audio ad's ability to stand out will fall if its word density rises?

Turning once again to Big Audio Datamine and campaign effectiveness results from Radiogauge, we undertook a further regression analysis that found Creative Standout in audio advertising is very strongly linked to ad response in the form of website visits. This regression plot demonstrates that for each 1% rise in Creative Standout achieved by an audio ad we can expect its web response rate to increase by 0.25%. 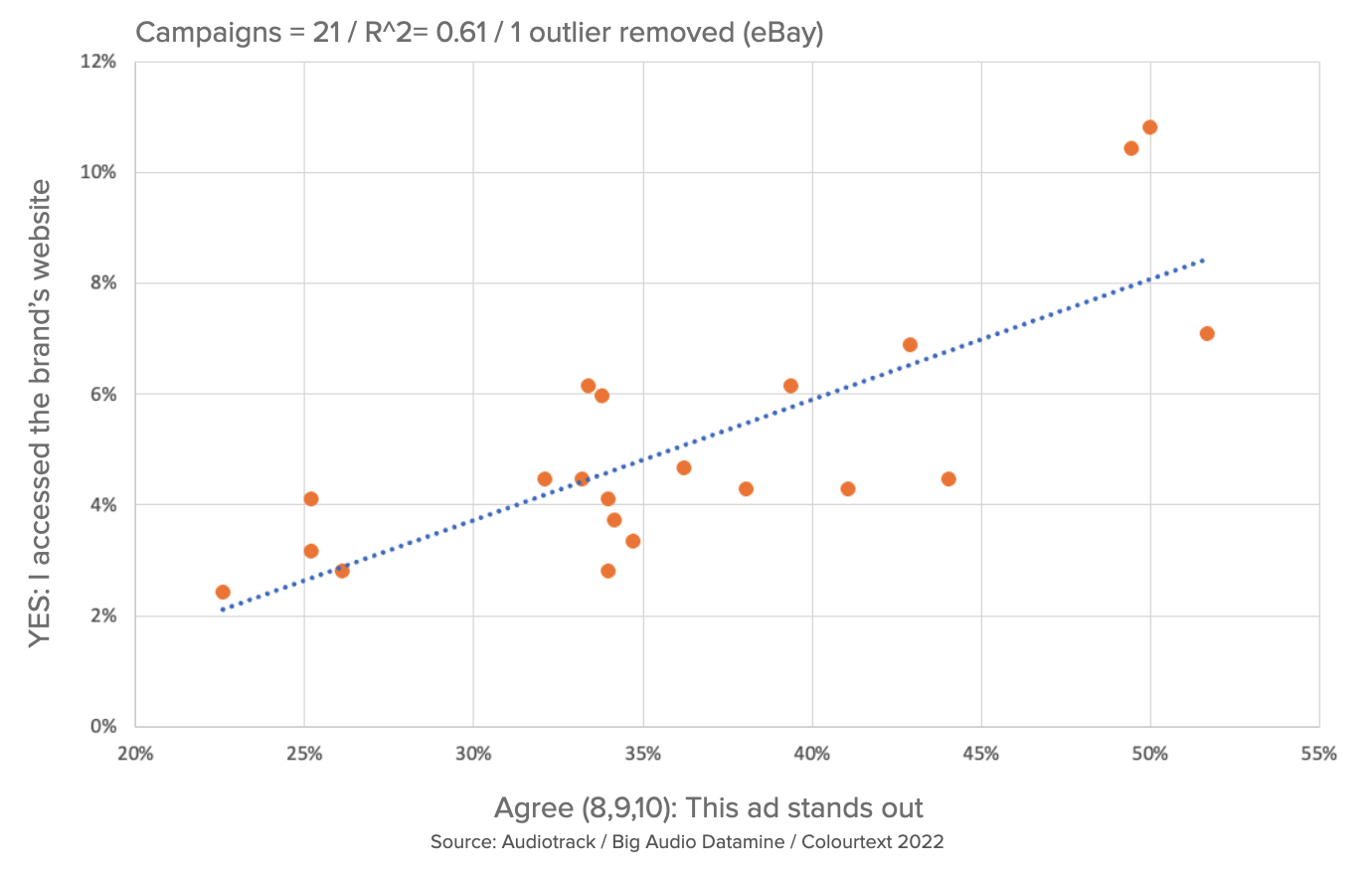 To put this finding in context we built a data model to understand the practical effects of the interplay between word density and creative standout in audio advertising. The model is based upon the same data from the 22 campaigns common to both Audiotrack and Big Audio Datamine. The average Total Audience Reach for these audio campaigns was 33 million adults age 15+, which can be plugged into the model as the first input.

The next number we can input is a target or desired word rate for an ad. In this instance we've selected 147 words-per-minute, which happens to be the average wpm rate for audio ads that contain zero Terms & Conditions. The model then generates the average Creative Standout Score and Web Response Rate for ads with this word rate, which in turn generates an estimate for Campaign Web Referrals based on the campaign audience reach we plugged in at the beginning (33 million). 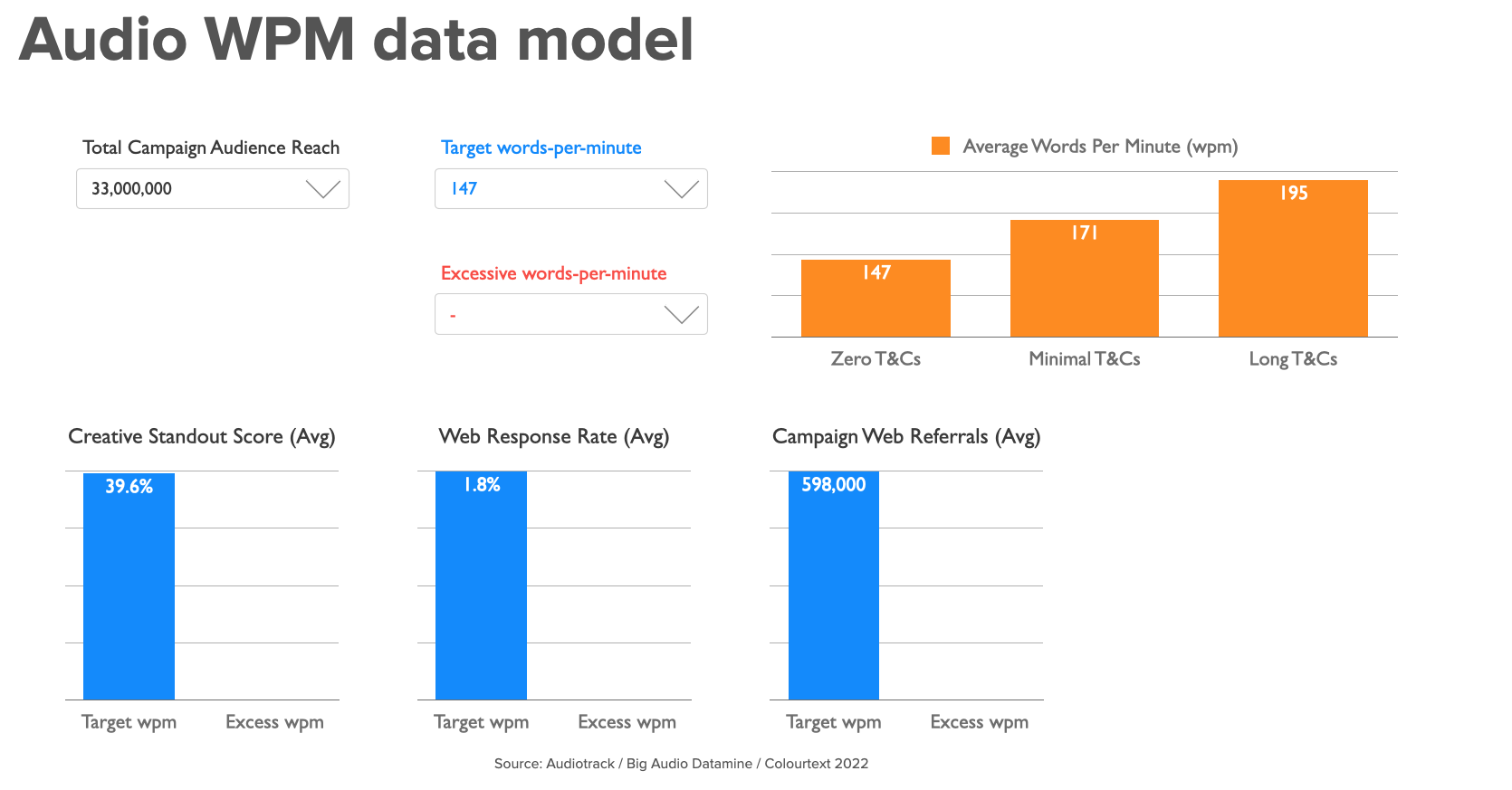 Next we can enter a value for an ad that contains excessive words-per-minute. In this case we've selected 195 wpm, which is the average for audio ads that contain long Terms & Conditions. This immediately reveals that increasing an ad's word rate by 48 wpm (+32%) degrades the average Creative Standout score from 39.6% to 32.9%. This in turn degrades the average Web Response Rate from 1.8% to 1.3%.

The practical effect is that if we add just 24 extra words into a standard 30 second ad we can expect our audio campaign to generate 160,000 fewer web visitors than it potentially might otherwise have done. That equates to a 27% fall in ad response, which for some brands could represent a lost revenue opportunity that's similar in scale to the gross cost of their audio campaign. 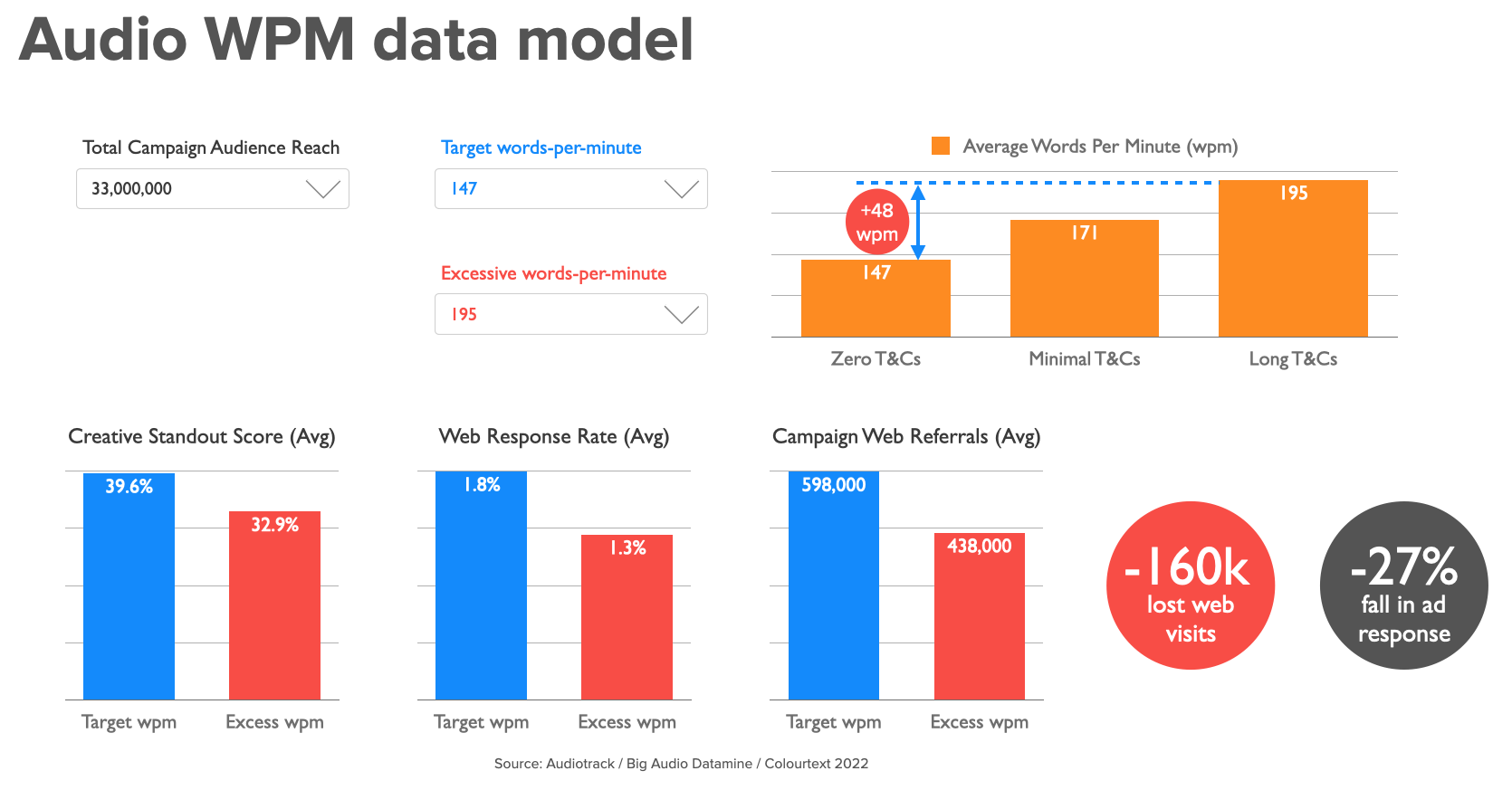 Unlike in television, where production costs have always been very high, making a bad audio commercial is rarely a career-limiting move for brand marketers or ad creatives. Even today audio is often planned as a low cost after-thought and the quality of some audio creative often reflects this.

However, thanks to the rise of addressable media platforms like podcasting and music streaming, audio in all its variants is a hot property once again amongst advertisers. This means a lot of new people with little experience of audio creativity are coming into the space and asking a lot of questions. Interestingly, the impact of word count on audio ad response is rarely one of those questions and, frankly, we weren't thinking much about this issue either.

But now we can see the problem, thanks to this analysis of Audiotrack and Radiocentre data, it seems obvious. Audio is a time-based medium that delivers speech-based information at a rate of 39 bits per second in a linear and sequential fashion (a factoid sourced from this interesting scientific paper). This means there's a natural limit to what we humans can take in and retain. Stuffing ads with verbalised information swamps our ability to receive and engage with brand messages - that's why gabbled ads sound so confusing.

However, audio conveys a second, entirely different and non-linear channel of information, which is emotional in nature. Humans are incredibly sensitive to variances in audible tonality, pitch, timbre and cadence. We can perceive and feel the fine-grained texture of sound just as well as we can read the emotional state of another person's face.

Low category involvement and poor creative standout are twin issues for many brands across a range of market sectors. This is where an appreciation of word density within audio ads can help reduce the risk of low-performance campaigns.

Our word density analysis shows that upping the word count to convey more information is a weak creative strategy for audio. High word counts tend to overwhelm, and then bore, people's ability to listen with pleasure or interest. Working towards lower word density in audio ads can help brands leverage the emotive and narrative virtues of audio that drive creative standout, which in turn boosts ad response, especially in the form of website visits.

To conclude, reducing word density is not a magic creative bullet. However, word density can be a good proxy for an ad's ability to let the other emotional, non-linear qualities of audio communication perform their magic. Our study shows that when it comes to creativity in audio advertising, it's usually better to say more with less.