How to go viral by transforming an ad campaign into a social campaign.

Dove's famous 'Real Beauty' campaign has been back in the news again with new activity focussed on the effects of heavily edited selfies and photo filters on the self esteem of young people.

Dove Soap first launched its successful 'Real Beauty' theme in 2013 with a viral marketing campaign called 'Dove Real Beauty Sketches'. It became a social media sensation and the most-watched YouTube video of its time. The campaign was described as an inspiration to millions of women all over the world and continues to resonate today.

The question many brand owners ask is how to replicate this viral marketing success. Colourtext was commissioned by social network giant Twitter to answer this question by finding out why so many Twitter users loved and shared Dove’s Real Beauty campaign. 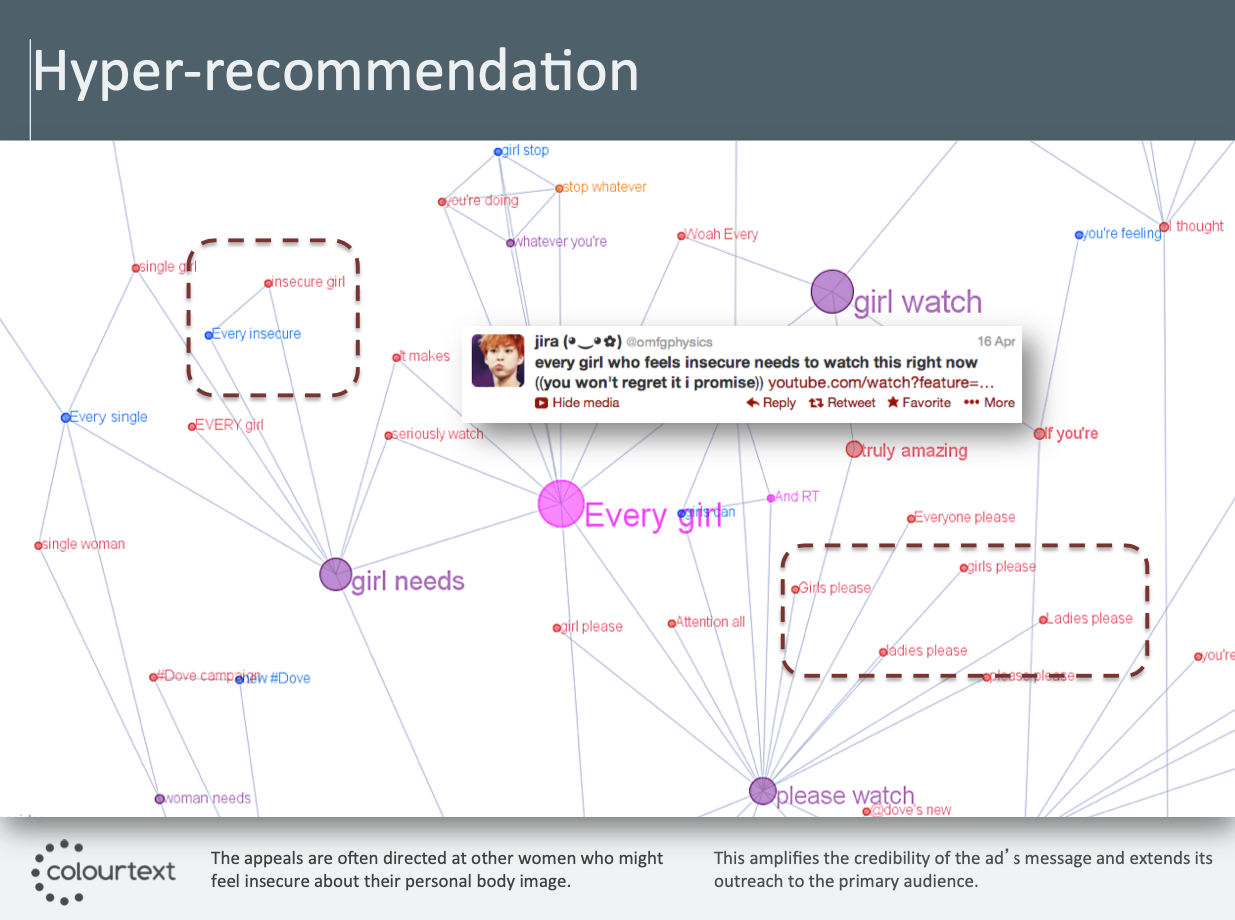 We used Quant Semiotics to analyse at scale the Twitter audience reaction to the original 'purpose driven' Dove campaign. By processing hundreds of thousands of Tweets we were able to identify viral marketing insights that conventional advertising effectiveness methodologies cannot access.

The key driver of the campaign's viral spread was to transform itself from an 'ad campaign' into a 'social campaign'. The campaign's central tag line was repeated and transformed by Twitter users into a rallying cry that tapped into several cultural and social themes that were, and remain, important to women.

Our analysis revealed how female Twitter users “hyper-recommended” the video and embraced its clever use of CSI-style forensics. Dove’s target female audience strongly urged, and in some cases appealed, to other women to view the online ad. Reactions to the ad on Twitter went far beyond conventional ReTweeting, suggesting viewers embraced and internalised the ad’s message in a deeper way.

Oliver Snoddy, Twitter’s UK Head of Planning at the time, commissioned the project and commented: “Colourtext provided Twitter with a scalable data analysis solution that yielded deep insights into the contribution made by Twitter to the propagation of Dove’s commercial across the web.”

To learn more about applying Quant Semiotics to study a viral marketing campaign please drop us an email. You can download the Dove Real Beauty Sketches viral marketing case study by clicking the button above.