Colourtext has partnered with TV attribution experts Adalyser to create a case study about a TV campaign for Quooker taps that measures the ability of TV ads to drive web response.

Until recently TV has been measured and valued primarily on its ability to deliver audience reach and frequency. It’s what generations of Post Campaign Analysis reports have typically focused on. However, the rise of digital marketing concepts and practices has encouraged a swing in media evaluation towards measuring TV’s ability to generate ROI, principally in the form of website hits.

Many factors underlie this trend, but perhaps the most significant is the growing number of new companies that have web traffic acquisition and online transaction baked directly into their brand DNA. Comparethemarket, Trivago, Asos and Pretty Little Thing are just a handful of examples.

As this new generation of DTC (Direct to Consumer) brands grown their revenues they invariably begin to experiencing diminishing returns from digital optimisation marketing strategies. When this happens they turn for the first time towards TV and Radio advertising as a means to drive upper funnel customer acquisition.

These companies tend to bring the expectations of a digital-native mindset to the TV airtime market, which can cause tensions. They want to know how much website traffic a TV or Radio campaign generates but broadcast media planning and ad sales operations find it difficult to answer this basic question.

Beyond the task of measuring direct response and delayed response, the challenge facing brands today is how to measure and predict TV’s ability to generate a continuous pipeline of customers that make purchases. Before online datasets became available it was practically impossible to measure how well TV did this.

This is where TV web attribution analysis comes in. Colourtext has partnered with TV attribution experts Adalyser to create a new case study about the ability of TV advertising to drive web response. The campaign we studied was for Quooker, the premium kitchen tap manufacturer.

The majority of Quooker sales are transacted online and the brand’s marketing efforts focus on driving website visits. Quooker decided to increase its investment in TV advertising and spent approximately £1.4 million between September 2019 and March 2020.

Adalyser's platform was used to gathered Quooker's web traffic data and align it with transmission times for each of Quooker's TV campaign spots. Colourtext crunched this data and identified the following key insights: 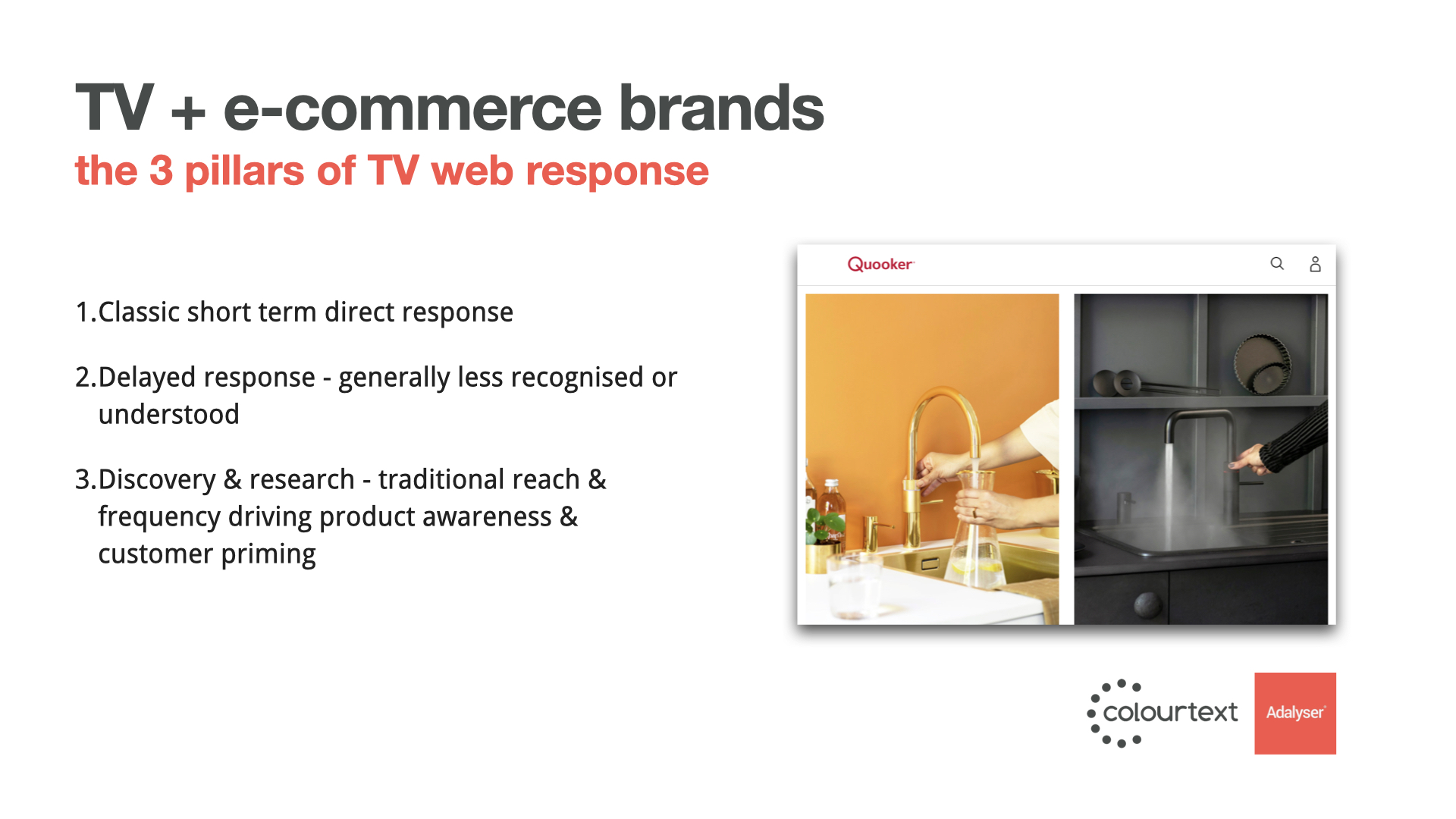 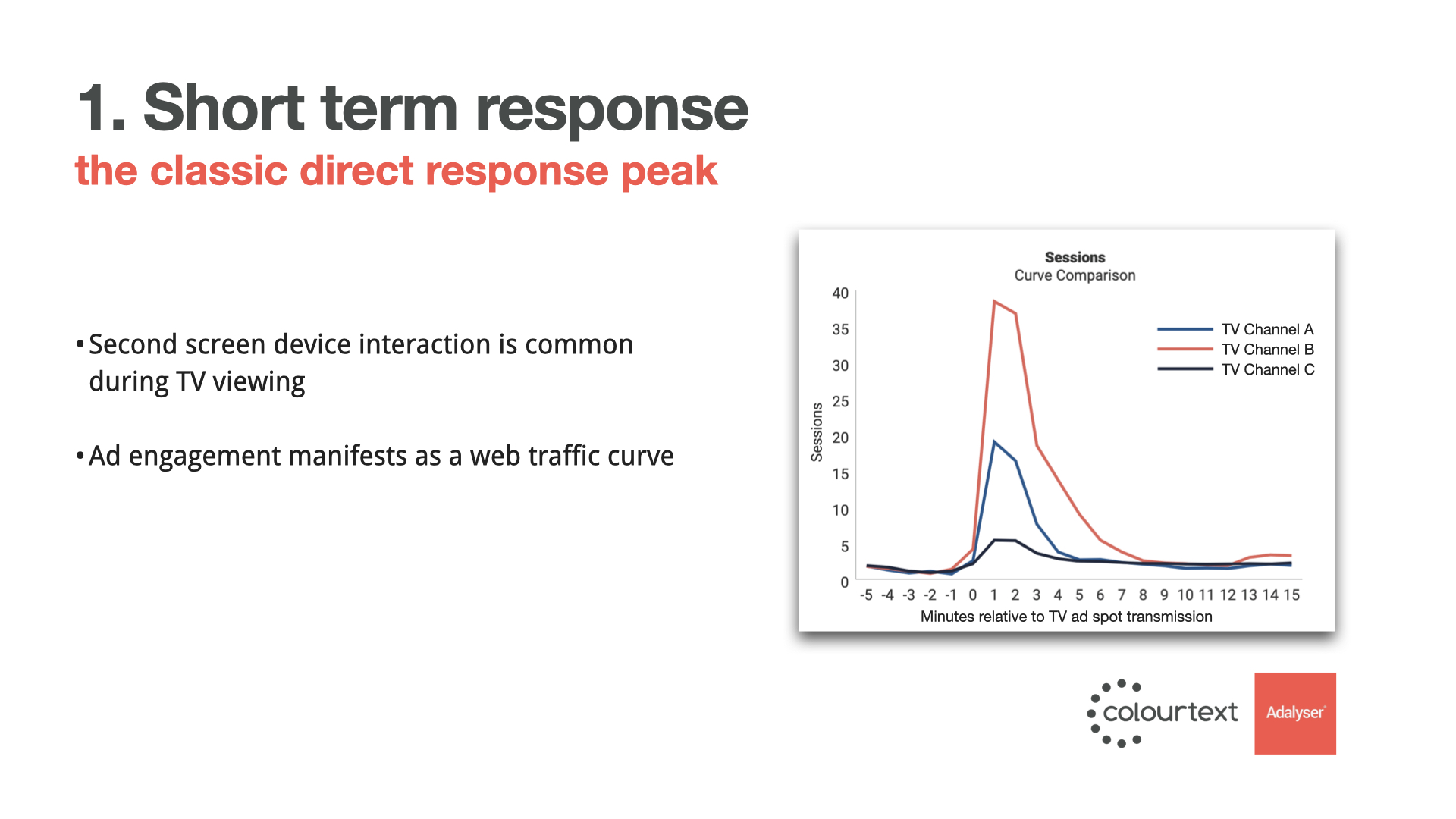 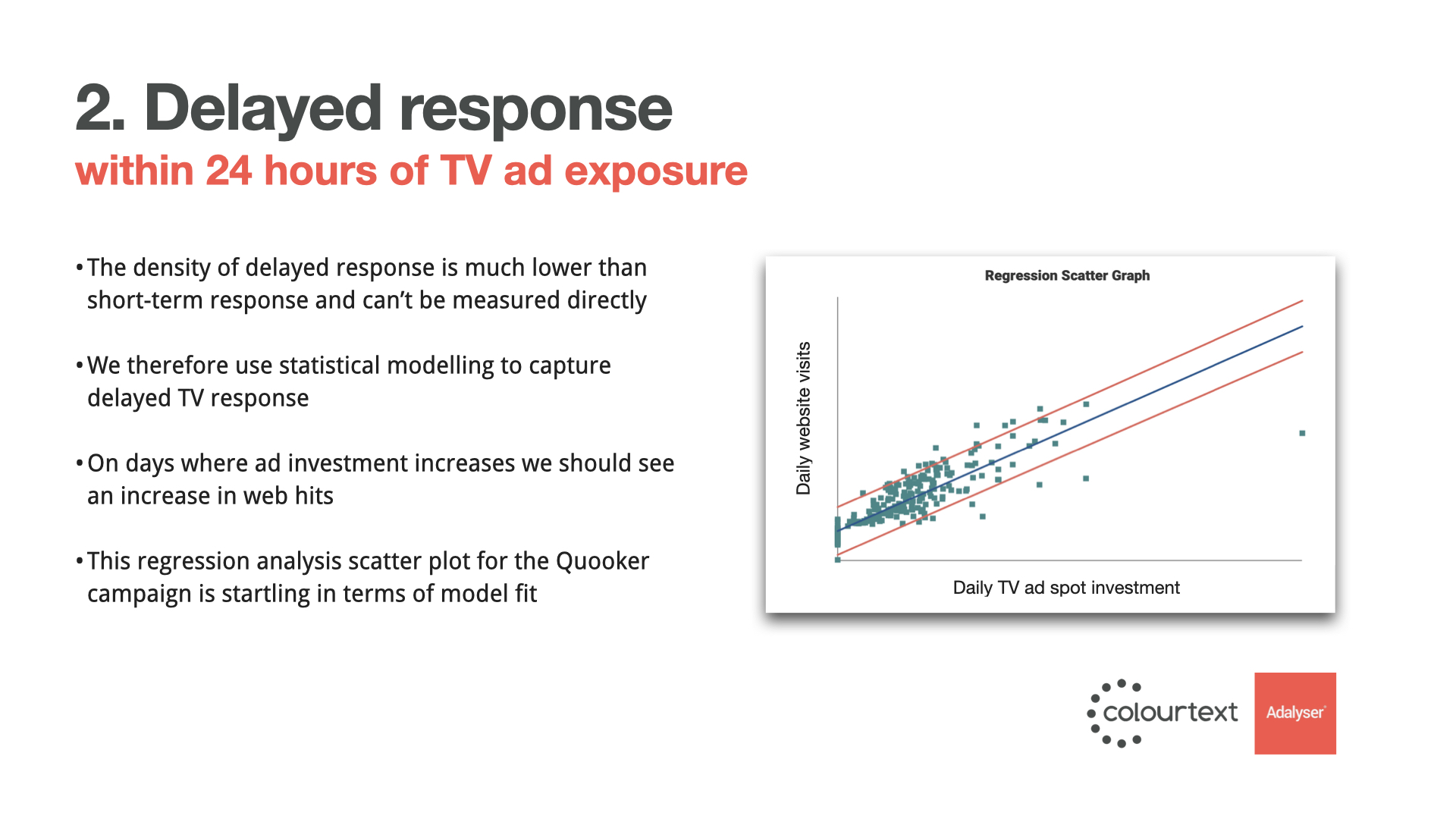 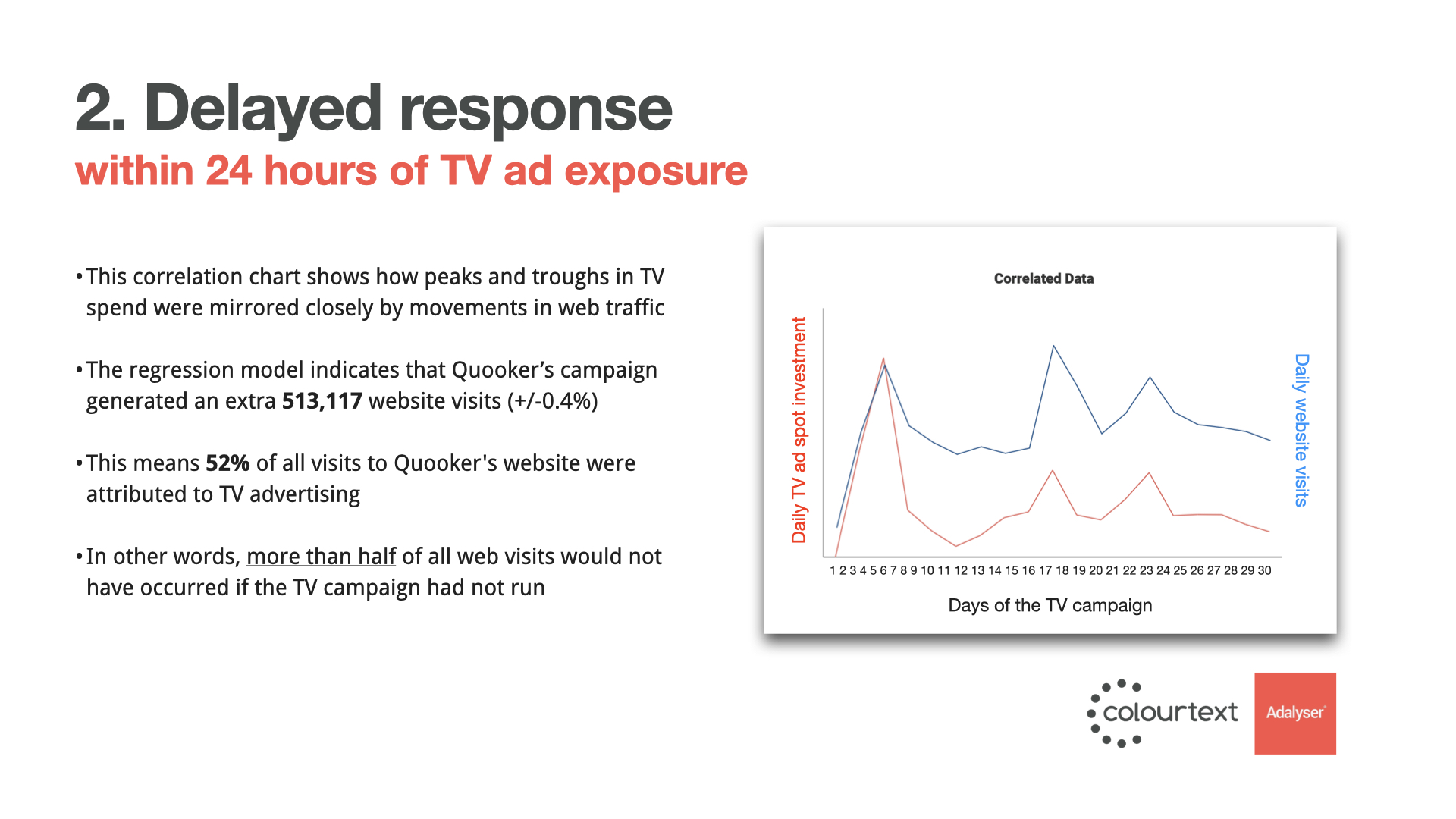 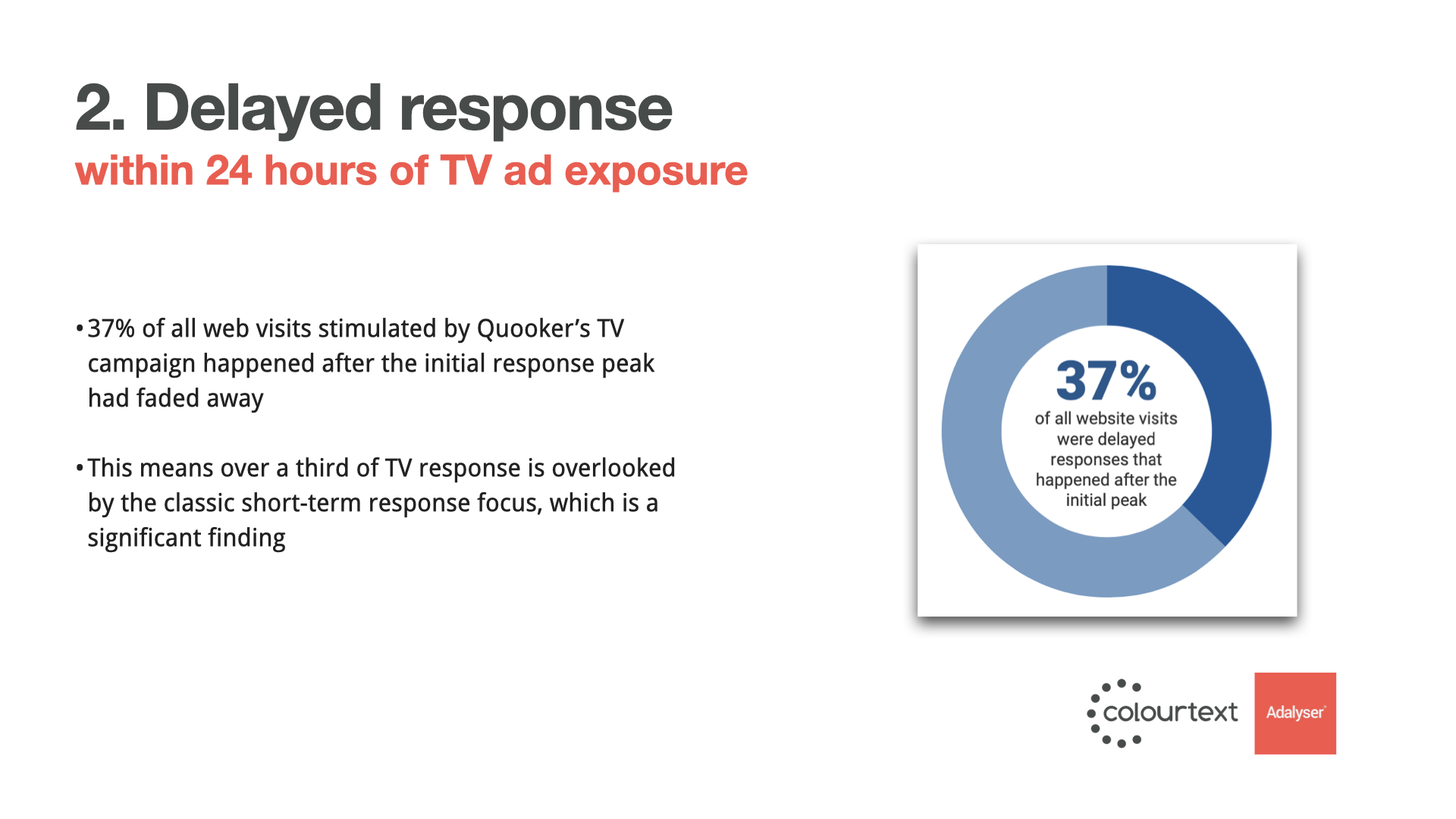 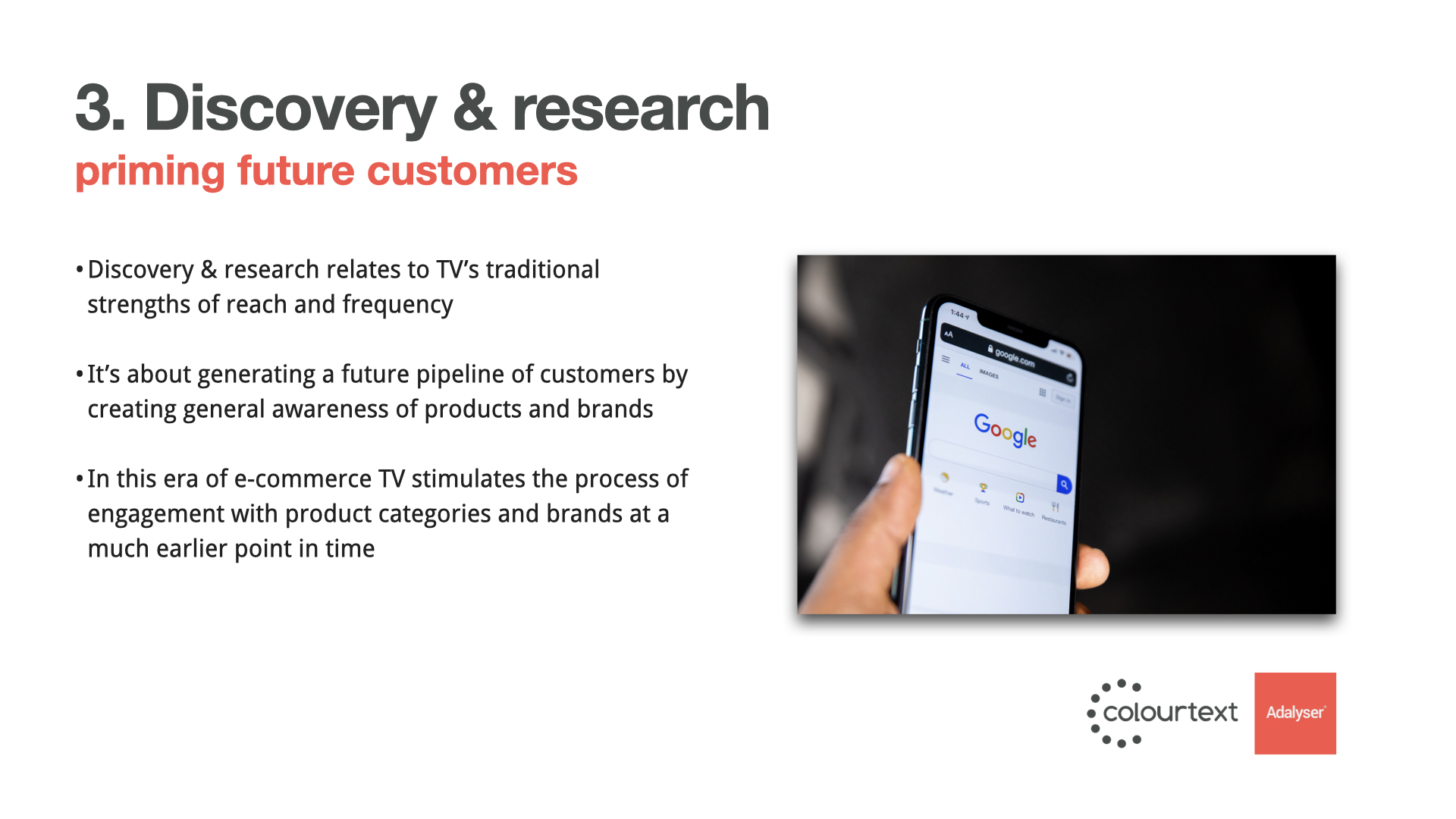 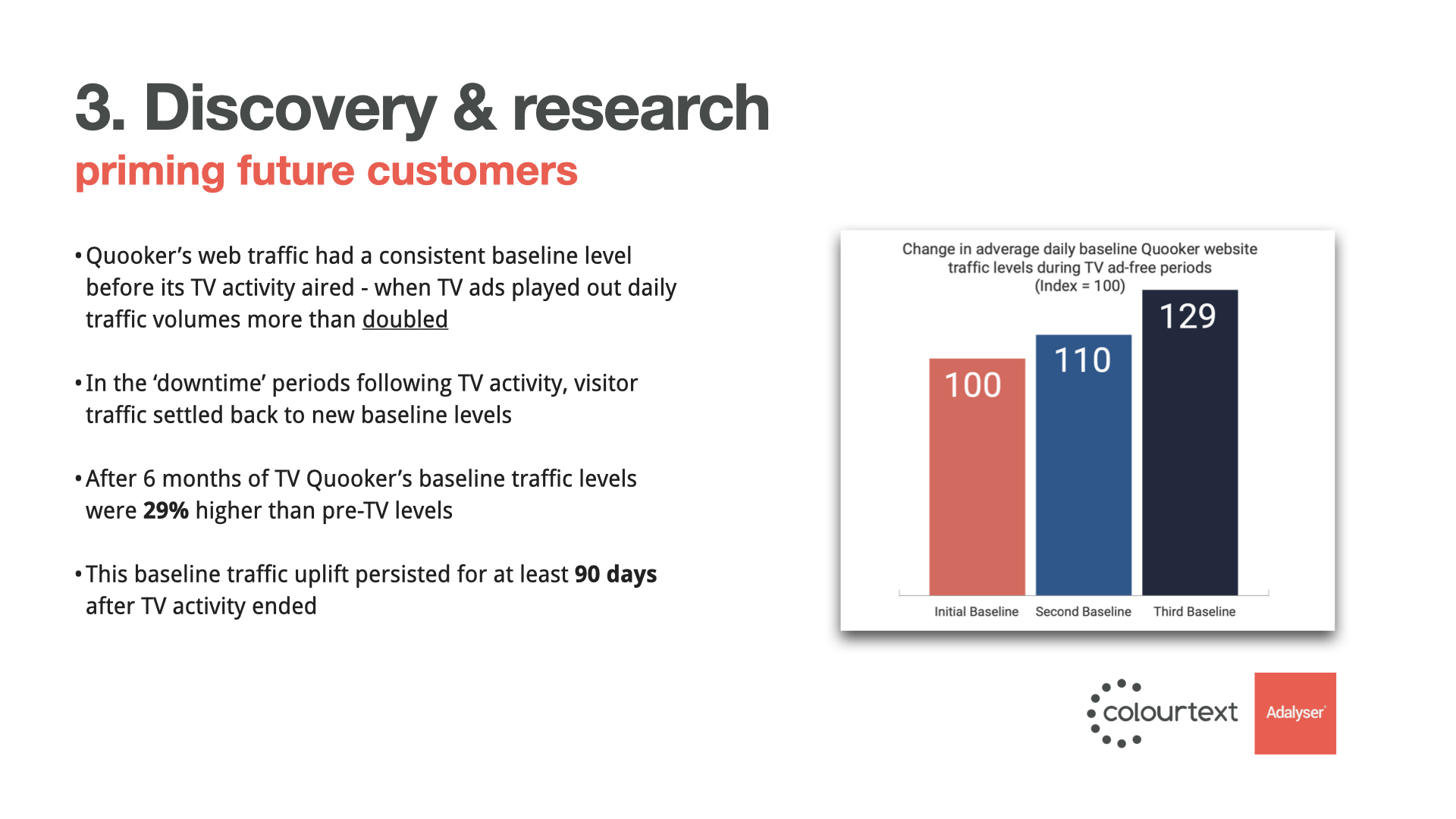 1. There are 3 pillars to TV’s ad response offer: short term 'direct response', ‘delayed response’ and 'discovery & education'. The last of these relates to TV’s traditional strengths of reach and frequency and ensures a future pipeline of customers by creating a general awareness of products and advertisers.

3. 37% of all website visits stimulated by the TV campaign happened after the classic 5-minute short-term direct response peak had faded away. The discovery of a significant 'delayed response' aspect to TV advertising is an important finding that challenges traditional ideas about measuring the effectiveness of Direct Response campaigns.

4. During 'rest' periods when no TV ads were broadcast, the average baseline number of daily web visits to Quooker's website grew by 29%. The growth in baseline traffic occurred in a linear stepwise fashion during each consecutive 'rest' period that followed a burst of TV activity. This pattern strongly echoes the shape of Binet & Field's famous 'The long and the short of it' graph.

If you'd like more detail about these findings or want to talk about measuring the performance of your next TV ad campaign, you can get in touch with us by email.