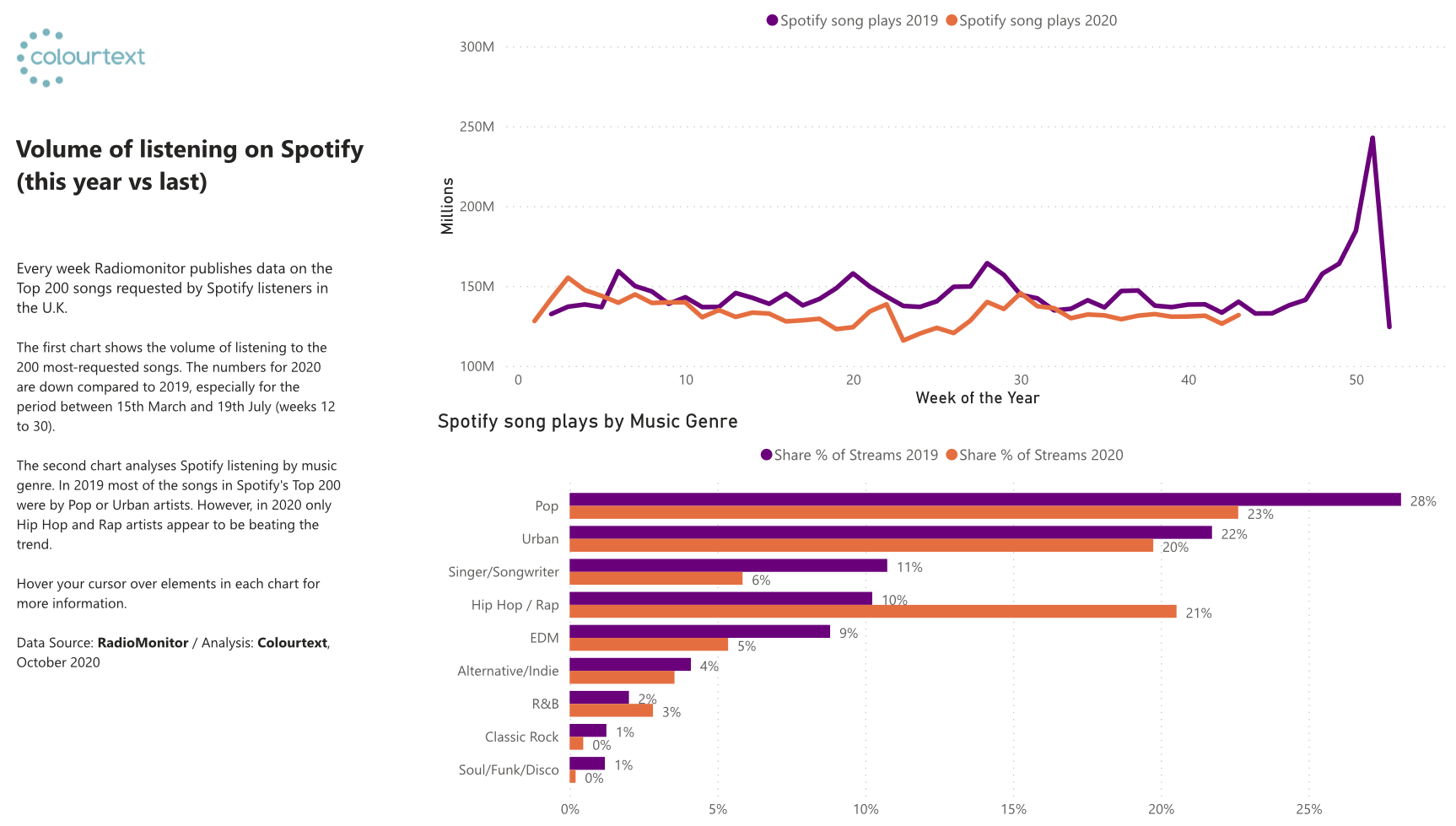 Access the dashboard
Sign up for instant access to our Spotify listening trends dashboard
Get free access to the 'Lite' version of our dashboard analysis for the latest Top 200 artists, tracks and music genres on Spotify.

Every week Radiomonitor publishes data on the Top 200 songs requested by Spotify users in the UK. Back in July 2020 we ran a study of this data to see if lockdown measures were changing music listening habits, which was published as an interactive dashboard.

This proved popular and people have asked for an update, so here it is. The latest study includes a new segmentation of Spotify listening by music genre, which contains a few surprises.

You can explore the dashboard for yourself immediately below. It's pretty simple and has just three pages or 'tabs' that are accessed by toggling between the arrows at the bottom of the dashboard pane.

Colourtext's analysis of the Top 200 songs requested by Spotify users in the U.K. takes a look at the biggest new music launches of the previous 6 months. The cumulative weekly plays of new songs are overlaid on each other to reveals how quickly listening volumes have grown at comparable points in time following initial launch.

If you'd like to chat about accessing to a more complete and in-depth analysis of Spotify listening trends please drop us an email and we'll get right back to you.

It’s fair to say that 2020 has been an unusual year on pretty much every level. The latest data reveals that listening patterns for the Top 200 songs on Spotify in the U.K. diverged significantly between the 2nd week of March and the last week of July, coinciding with the main periods of U.K. lockdown.

Streaming volumes in 2020 for the Top 200 songs on Spotify briefly drew level with 2019 volumes at the end of July. They have since stabilised but at a level approximately 6% below last year's pattern.

Lewis Capaldi (329m) and Ed Sheeran (235m) were the huge Singer/Songwriter genre acts of 2019. Lewis Capaldi has been the most-streamed artist on Spotify for the second year running, but in 2020 his Top 200 streams are 48% down on last year.

The big story in our Spotify music genre segmentation is that Hip Hop & Rap has seen its share of streaming for the Top 200 songs jump from 10% last year to 21% in 2020. In 2019 the biggest acts in this genre were Lil Has X, Aitch, D-Block Europe and Travis Scott but none of them broke through 100m streams.

However, following the tragic death of Pop Smoke in 2020 his Spotify streams have reached 156m to date. Other acts like Roddy Rich, Saint Jhn, KSI, 24Kgoldn and S1mba also saw their streams grow sharply during 2020.