We set out to find any gaps that might exist between public posture and private priority in the field of environmental sustainability.

How much do consumers really care about environmental sustainability?

Once in a while market researchers have to investigate topics where people give survey responses that often reflect fashionable or socially acceptable opinion rather than what they truly believe. This is sometimes called the revealed preference problem.

For instance, if you ask people to rate the importance of environmentally sustainable behaviours they tend to say things like, "oh yes, it's really important and I care about the environment a lot."  This often reflects a strong and widespread consensus that only the most objectionable sort of person wants to pollute the planet or cause global warming.

However, we never have to look far to see that common behaviour doesn't always align closely with fine ideals. For instance, car manufacturers sell more SUVs than any other type of model and jetting off for foreign holidays is no less popular today than it ever was.

Getting to the truth in such matters can be a challenge, not least because survey respondents can be unconsciously duplicitous and even naturally devious. But failing to distinguish between 'social posturing' and 'personal priorities' can have serious consequences. These can range in severity from companies losing competitive advantage by pursuing weak 'brand purpose' marketing strategies through to governments winning or losing public support for policies like Net Zero. 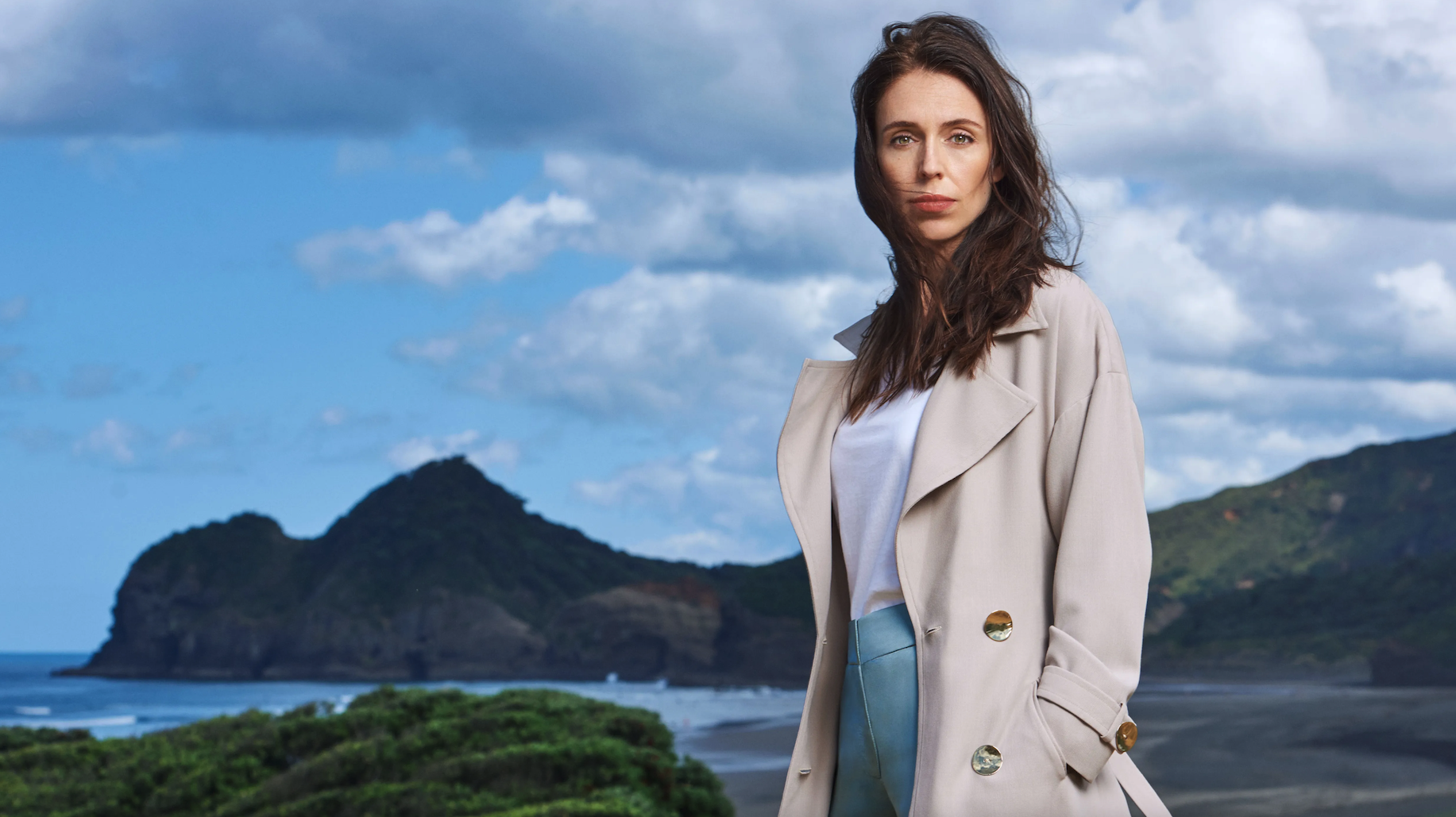 Our survey was conducted in New Zealand back in December 2017. The data may come from a remote island in the South Pacific and be getting a bit long in the tooth, but this would underplay the significance of the study's findings. In the first instance, the survey and analysis approach we developed for this project is directly transferable to new studies.

Secondly, the cultural similarities between New Zealand and other developed Anglo economies like the UK are so obvious they speak for themselves. Moreover, the survey took place soon after Jacinda Ardern became the country's first female Prime Minister.

This is significant because Ardern was elected as the head of a minority Labour government that relied upon a confidence and supply agreement with the Green Party. It's the first time a Green party has achieved significant political power in a first-past-the-post Anglo democracy. We can therefore assume this makes New Zealand, as a relatively green-leaning country, an interesting model for how deep the committment to sustainability goes in other markets.

The objective of the survey was to gain a more nuanced understanding of the relationship people *really* have with environmental sustainability. We set out find any gaps that might exist between public posture and private priority.

A nationally representative sample of 2,002 New Zealand adults aged 16+ completed our questionnaire. At the core of the survey was a set of 13 questions about sustainability.  These were embedded within a total of 72 questions that covered a broader range of topics.

This was done as a decoy measure to hide our primary focus on eco-sustainability. But we also guessed these issues have to 'share the stage' with other personal priorities and topics that jostle for attention.  Our aim was to understand the importance of sustainability relative to all the other stuff going on in people's lives.

As the survey unfolded respondents were free to select any number of topics that felt like important issues to them personally. Below are the Top 25 issues that people chose. On average our respondents selected 23 topics, which seems like a pretty high number. The Top 25 list features 7 environmental topics, which if taken at face value suggests a solid base of public sympathy or support for green policies like Net Zero.

At the end of the questionnaire we fed back to respondents all of the personal concerns they had selected earlier in the survey. Participants were then asked to whittle their personal list down to a Top 10 set of priorities.  Once this was achieved their Top 10 selections were presented again with a last instruction to choose a final Top 5. It was quite like taking part in the knock-out stages of a personal World Cup of woe.

The aim of this process was to move respondents through a 'priorities funnel' that helped reduce the number of topics that 'caught the eye' at the beginning of the survey into a shortlist of 5 core personal priorities. The act of having to choose and make trade-offs, we believe, played a key role in leading respondents to apply tougher judgement to the task of evaluating the true status of a topic in their lives.

The chart below shows the percentage of people choosing to 'prioritise' each of the Top 25 'personal concerns'. In every case the number of people promoting an issue into a priority is significantly less than the number who initially flagged it as a concern. This is partly a feature of the trade-off exercise, but there are significant variances within the data.

If so, this would suggest weaker commitment to, or support for, environmental policies in contexts where they conflict with other core priorities. A good way to resolve this question is to use a linear regression analysis.

The chart below uses linear regression to examine the statistical relationship between ‘personal concerns’ and ‘personal priorities’ in our data. The Top 5 Priorities chosen by a respondent are obviously a subset of each individual's 'Total Personal Concerns', so we expected a high level of correlation between the two. This is reflected by the very neat 'line of best fit' and a high R-squared value of 0.73

However, some of the issues plotted on this chart are positioned much further above or below the regression line, which we can use to understand the true depth of concern people feel about a specific topic. For instance, the issues highlighted in the chart below are positioned (vertically) the furthest above the regression line. This means that when people say these topics are a personal concern they tend to really mean it because they are more likely to confirm such issues as a Top 5 priority. 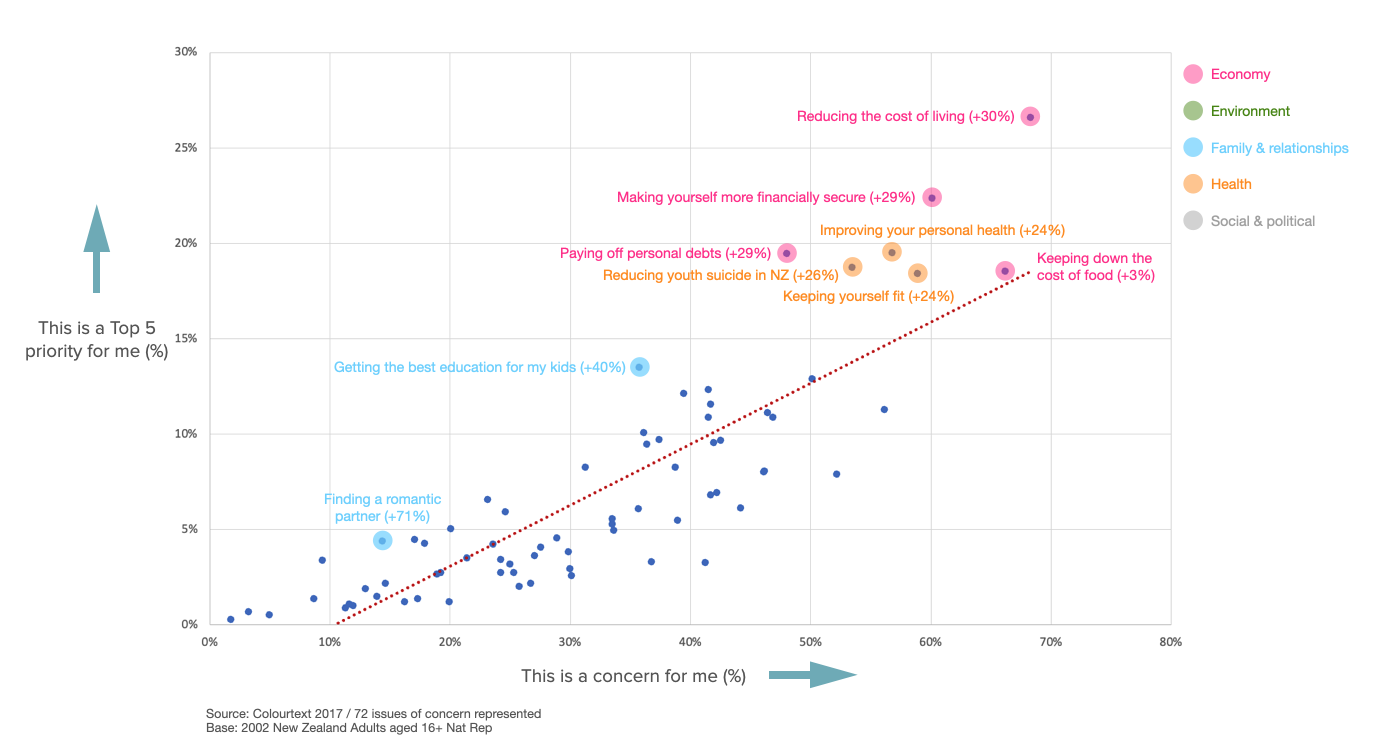 Conversely, the topics highlighted in this next chart are positioned furthest below the regression line. This tells us that when people say these issues are a personal concern they might not actually have very deep-seated feelings about them. Despite being flagged as 'concerns' these issues are less likely to translate into personal 'priorities'. 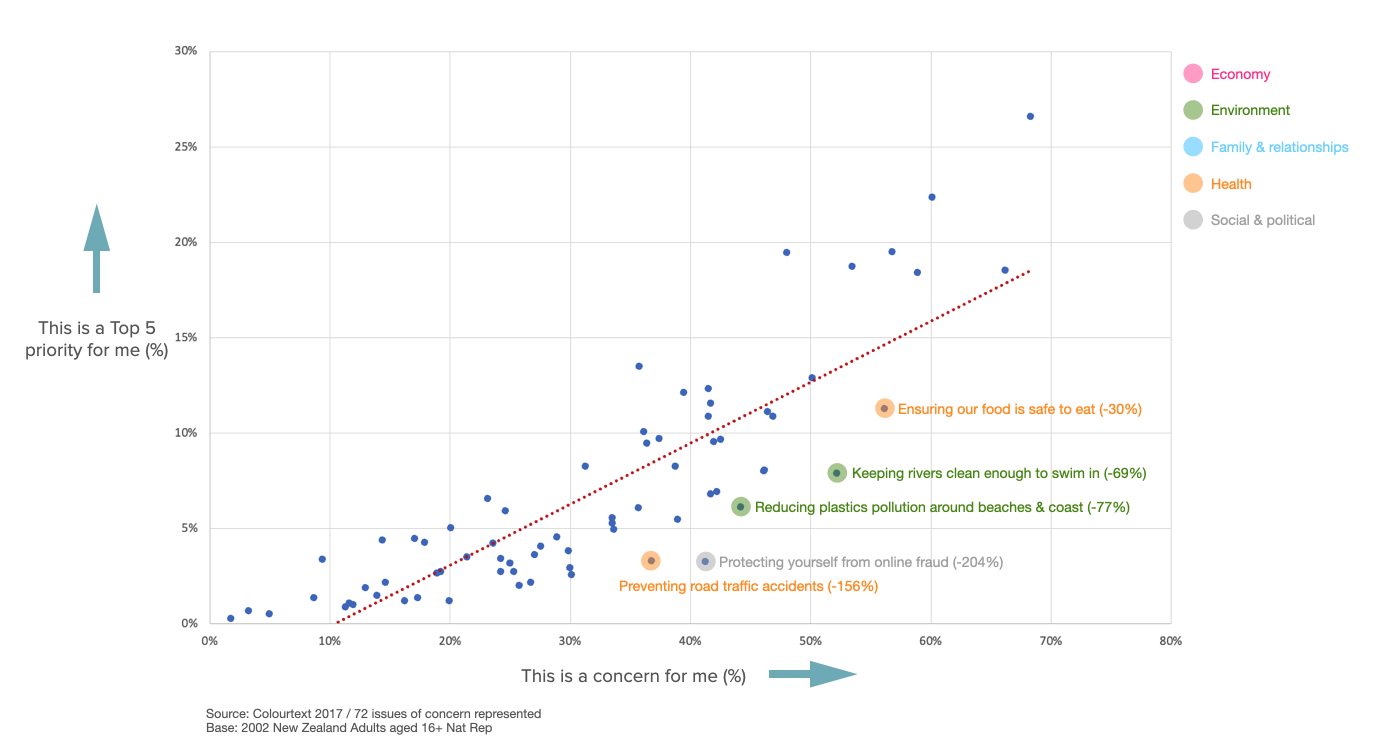 The issues that most people feel deeply concerned about relate mainly to economics and health. In contrast, the chart below tells us that environmental issues tend to fall below the regression line, suggesting that despite people flagging them as concerns they tend not to be confirmed as top personal priorities. The implication is that apparently widespread commitment to environmental issues could waver when the demands of more immediate or personally significant priorities begin to assert themselves. 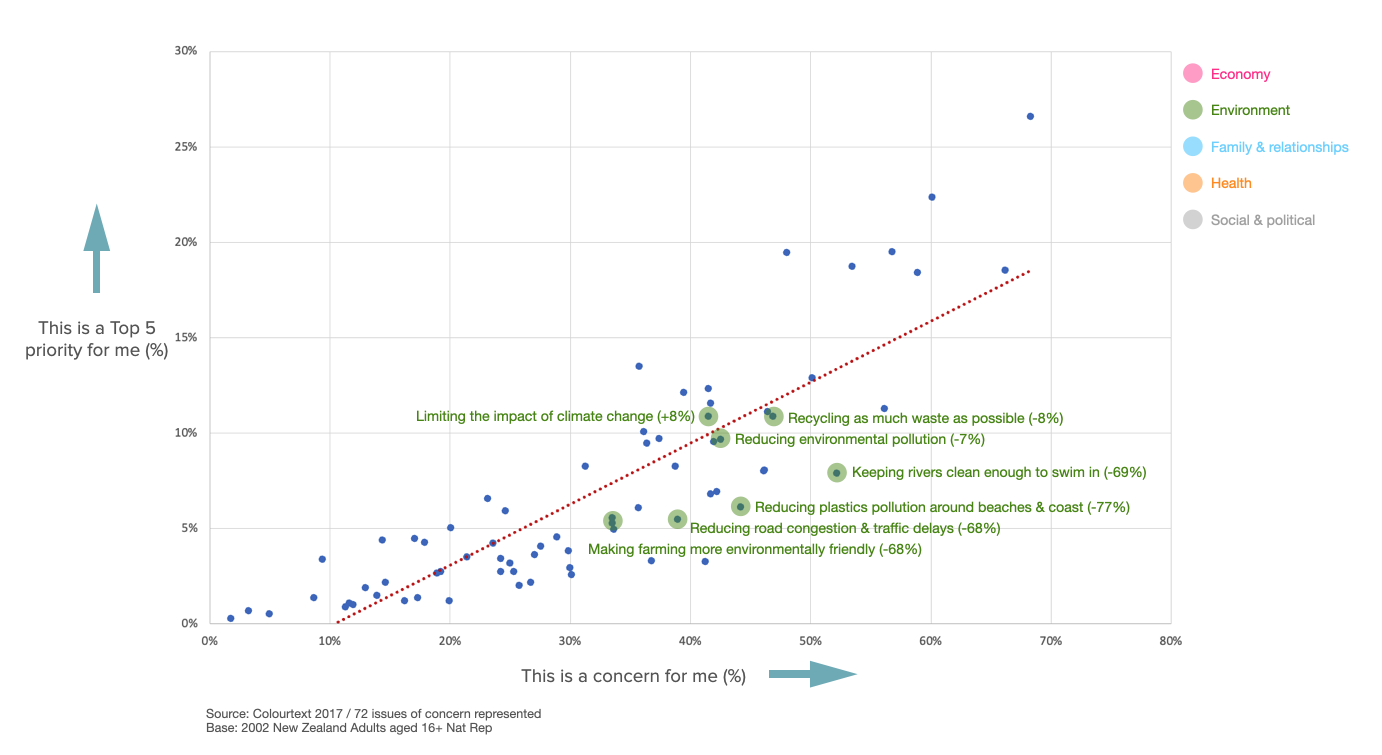 Failing to separate public posture from private priorities can have serious consequences, not least in matters of national and international climate policy. A recent series of tweets reflects the rising profile of this issue.

The Times journalist Robert Colvile commented on a new YouGov poll for The European Climate Foundation (September 2021) that asked respondents in the UK and across Europe if they would support or oppose an onshore wind farm being built close to where they live. 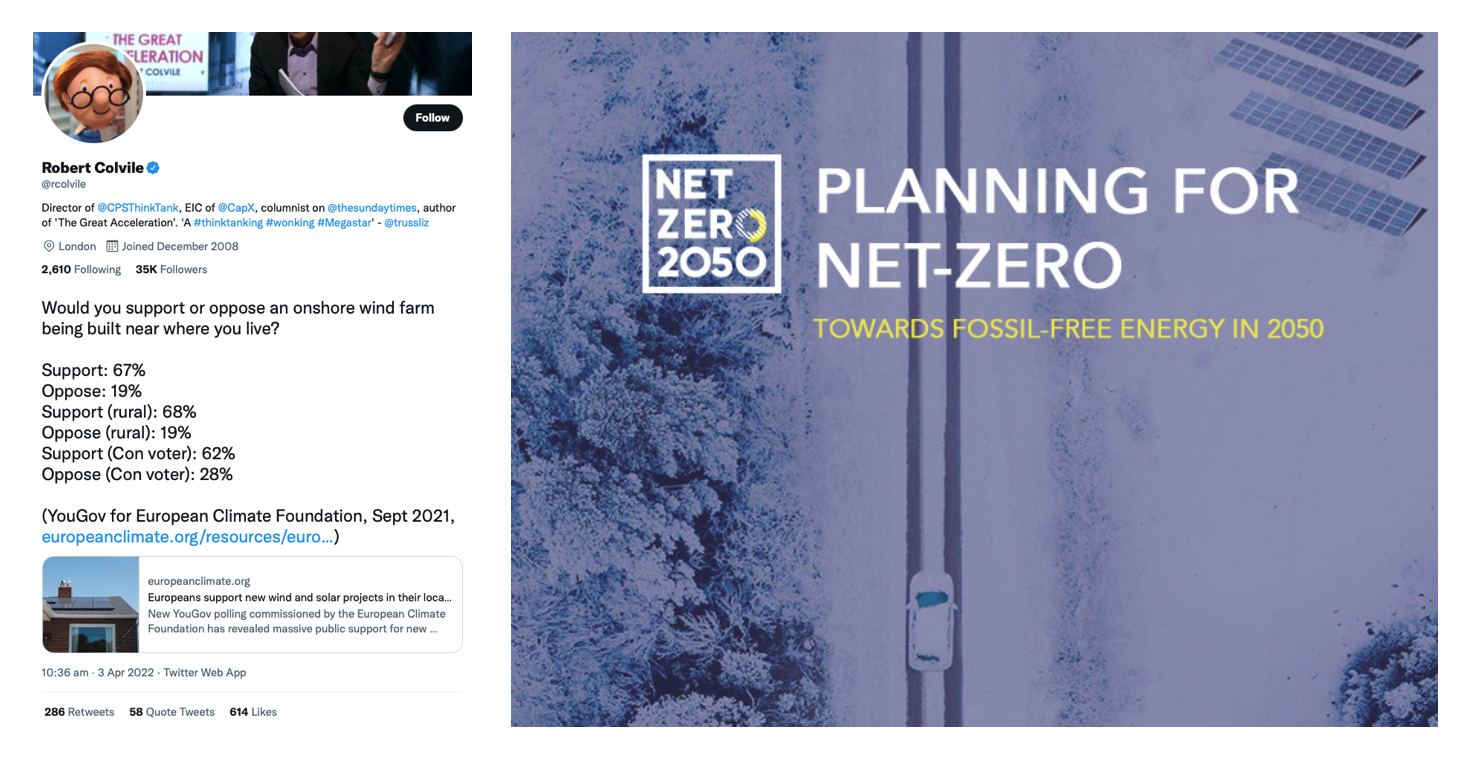 In the UK 67% of respondents said they would support such a development with only 19% saying they would oppose it. This was interpreted by Robert (for whom I have the greatest respect) and many others as a green-light to start building.

Based on the New Zealand study discussed above I remain to be convinced that attitudes have changed to the point where NIMBY opposition to on-shore wind development has melted away. Or that a broad majority of people are willing to prioritise environmental sustainability over their own personal cost of living pressures.

In light of this, relying upon regular eco-sustainability arguments to 'hold-the-line' on policies like Net Zero is unlikely to maintain broad support. However, part of me is willing to believe that times may be changing.

Gabriel Milland (above left) reported on a recent focus group where the rising cost of domestic energy bills has prompted a rethink amongst some consumers about the desirability of “massive wind turbines”. I think this speaks less to the prospect of wind energy reducing domestic energy bills (there's no evidence of that yet) and more to do with what kind of incentives might induce people to support on-shore wind installations right on their doorstep.

And another tweet by Marcel Dirsus (Political Scientist at the Institute for Security Policy, Kiel University, Germany) suggests Russia's brutal invasion of Ukraine might change the calculus in terms of linking the goals of environmental sustainability to energy independence.

The UK government has been quick to use this line of argument to ramp up development of nuclear energy production and on-shore wind power. Perhaps this approach will prove to be the smart way to secure deeper support for sustainability policies like Net Zero at a time of rapidly shifting national security priorities.

If you'd like to commission a study that replicates features of this project get in touch with us now.