A unique meta-analysis of the world's biggest radio advertising effectiveness database reveals what it takes to create the highest performing ad campaigns.

The data for the analysis is sourced from 267,200 Radiogauge consumer interviews conducted between 2008 and 2021. In total, 1002 radio ad campaigns have been tested over this 13 year period using a consistent sampling, questionnaire and survey interview methodology.

The numbers that define the Big Audio Datamine are impressive. Amongst the 1,002 campaigns tested there are 463 unique brands, represented by over 100 different media and creative agencies and spanning 14 different major advertiser categories. 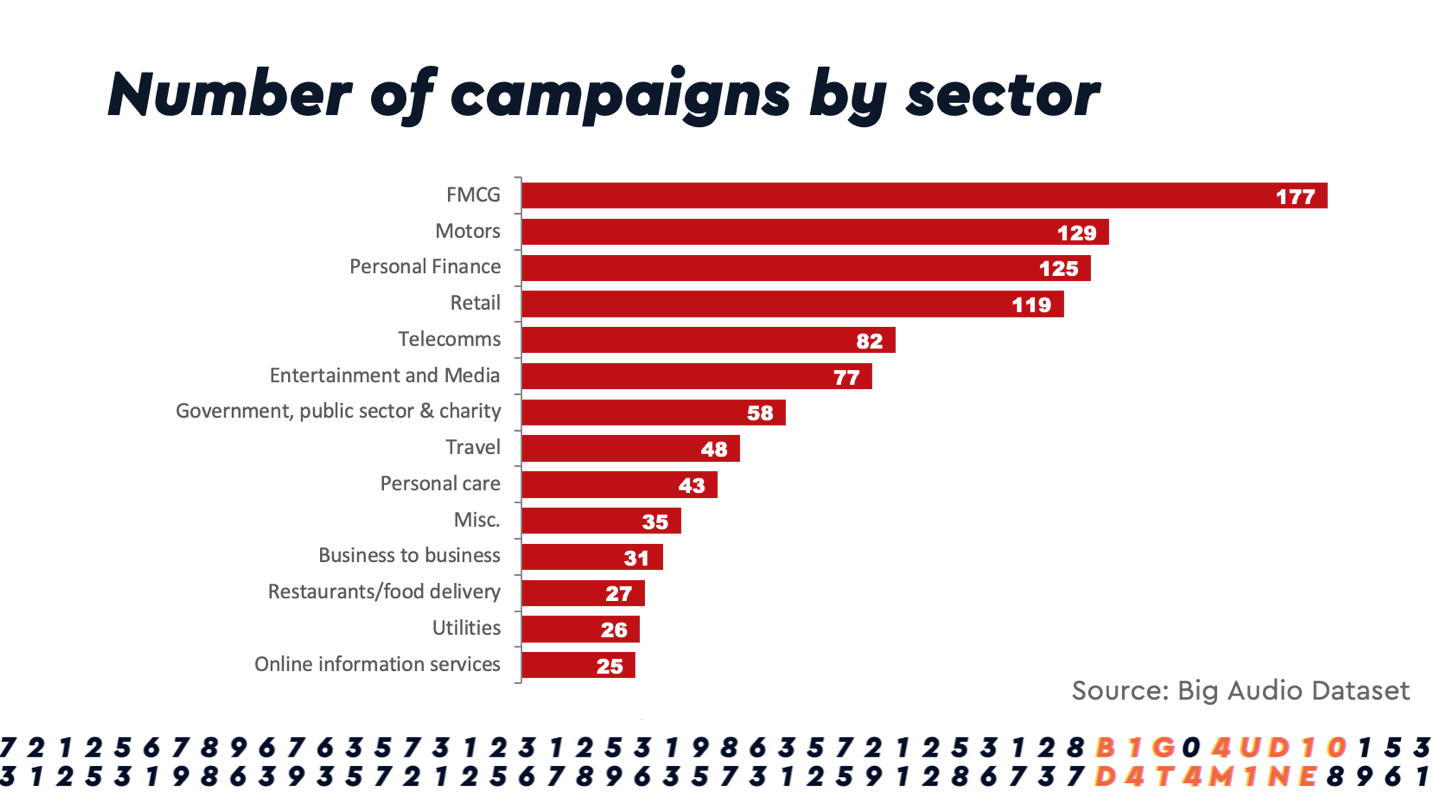 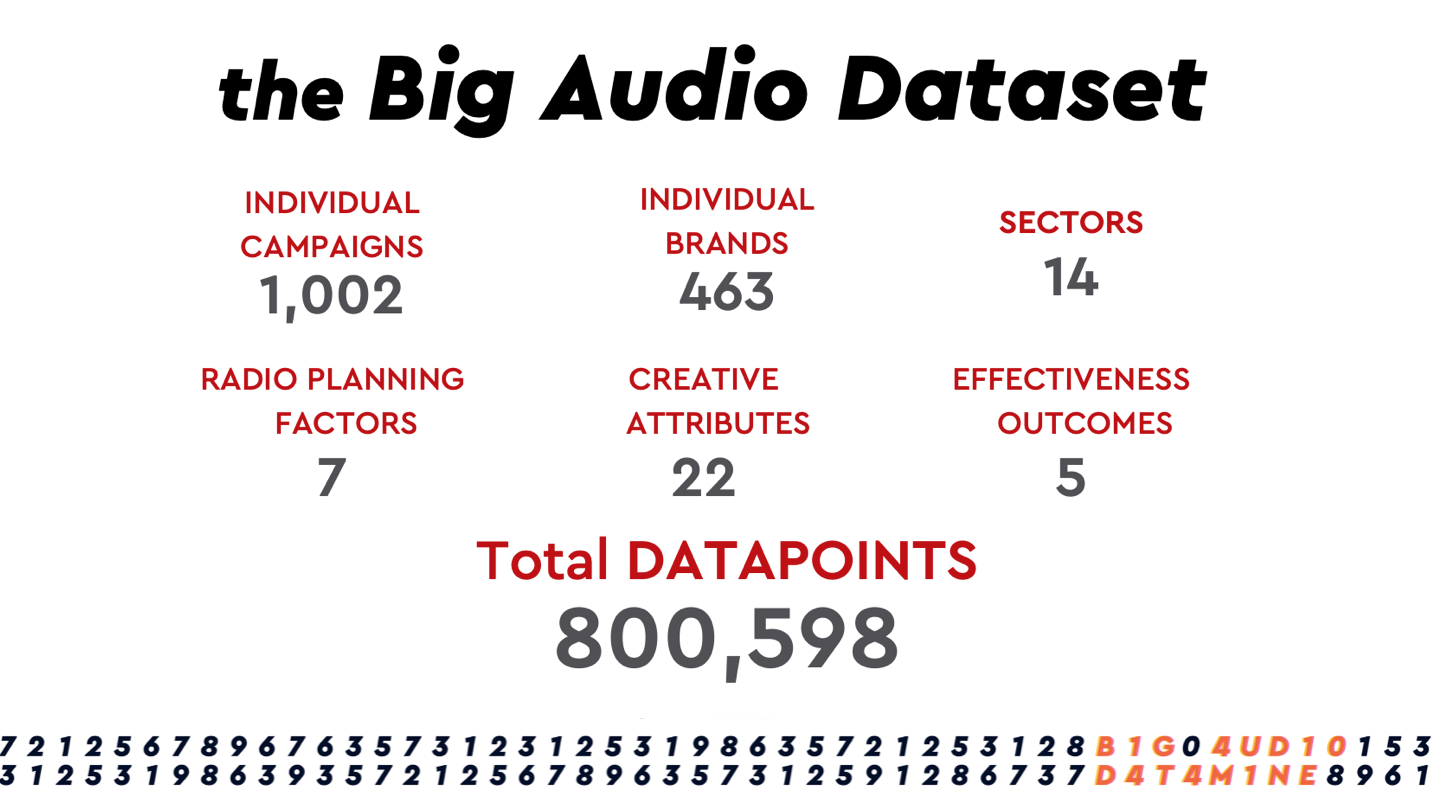 Each ad campaign is evaluated against a set of  standard upper-funnel brand metrics such as Awareness and Consideration. The audio creative itself is then evaluated against 11 diagnostic statements and data is collected on claimed ad response actions such as online brand search and website visits.

Additionally, every campaign in the Big Audio Database is tagged with information on 7 media schedule planning factors and 22 audio creative attributes. In combination, all of these elements yielded a total of 800,598 data points for analysis.

Radiogauge uses a TEST vs CONTROL sample methodology, where the ad test responses for Commercial Radio Listeners are compared against a demographically matched sample of Non-listeners. This means we can measure the brand uplift rate for people exposed to a radio campaign versus people who have not been exposed. Let's take a look at the average uplift rate across all campaigns for 4 standard advertising effectiveness measures: Advertising Awareness, Brand Relevance, Brand Trust and Purchase Consideration.

Advertising awareness (“have you seen or heard any advertising for <Brand X> in the last four weeks?”): this measure is generally most responsive to advertising activity and important for capturing radio’s ability to reach large audiences and drive awareness. We found levels of advertising awareness to be almost 50% higher among commercial radio listeners compared to the matched sample of non-listeners. 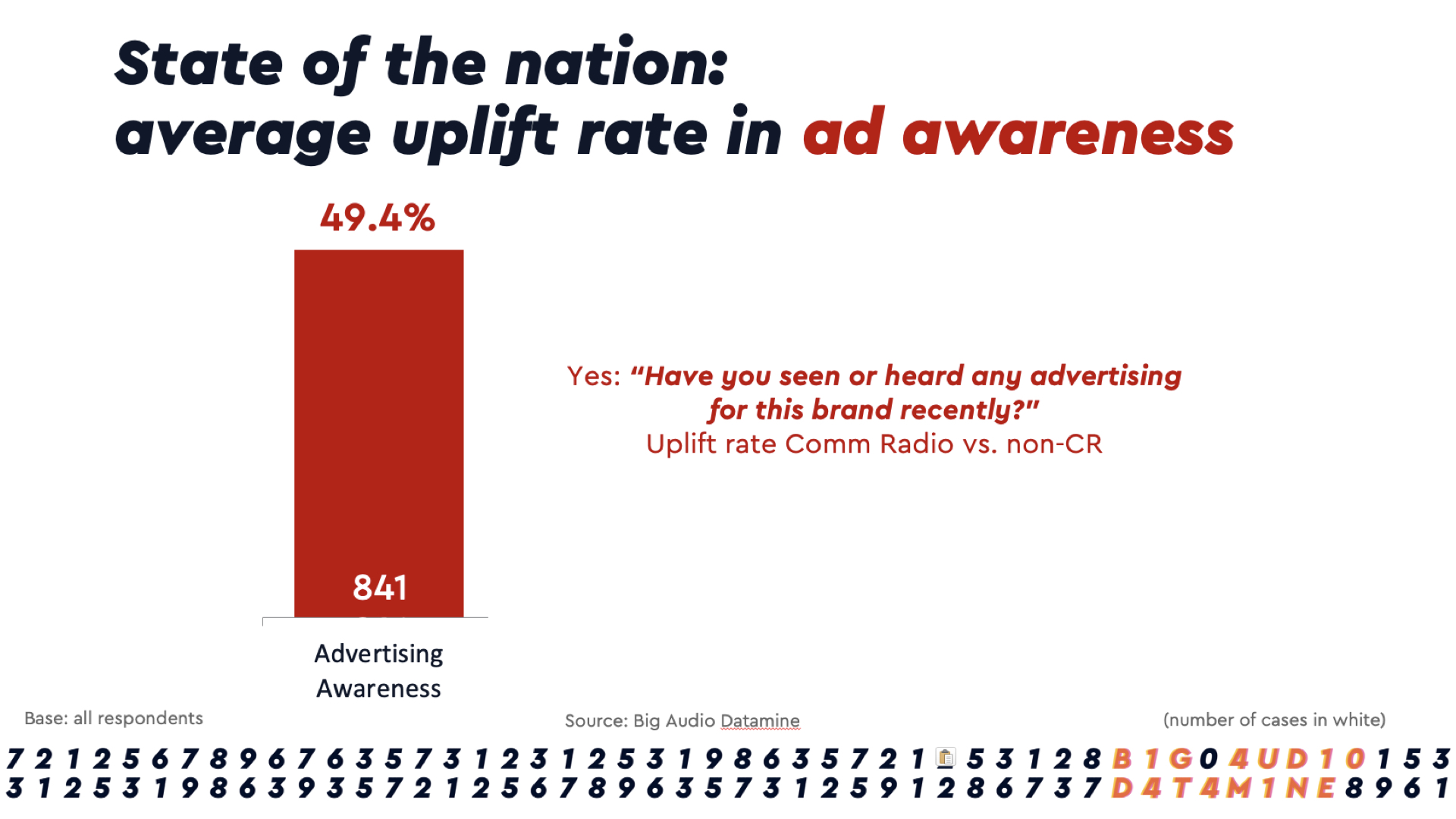 Brand Relevance ("this brand is for people like me"): when we ask people to rate the personal relevance of brands on a scale of 1 to 10, the number of people who strongly agree (8,9,10) that a brand is for people like themselves is on average 24% higher among people exposed to radio campaigns compared to those that are not. This reflects how radio listeners often perceive themselves to be part of a wider audience of people just like themselves. This remains true whether a station predominantly serves a local geographical community or a wider community of interest. 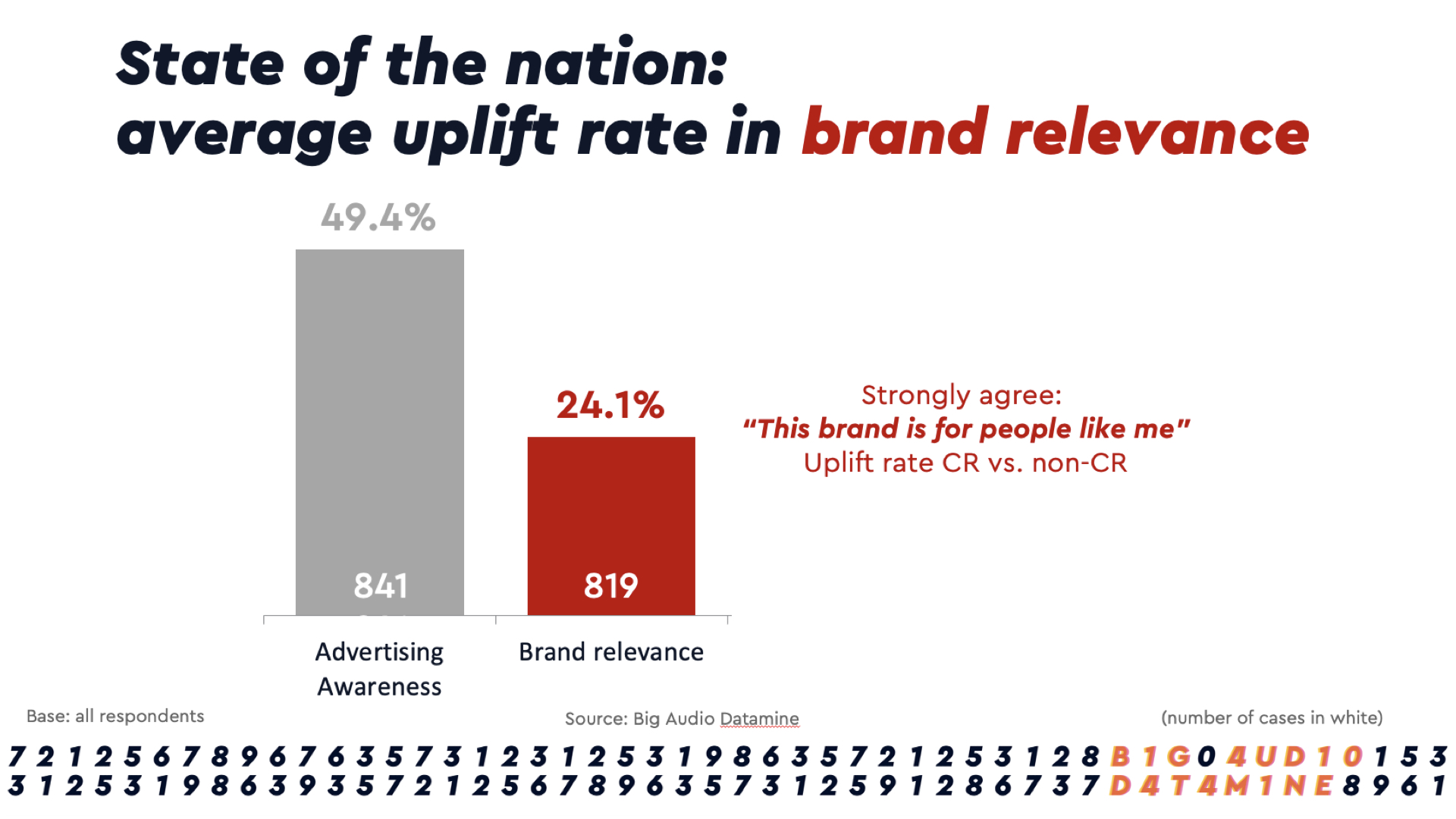 Brand Trust ("this is a brand I trust"): A sense of audience community has another important effect beyond building brand relevance. The uplift rate for people who strongly agree, “this is a brand I trust” is on average 31% higher among TEST sample respondents who have been exposed to radio campaigns in our database. This reflects historical analysis of the IPA Databank, which highlights how advertising campaigns featuring radio generate significantly higher levels of brand trust than those that don’t. When viewed in the context of the Advertising Association’s recent discovery of a general decline of consumer trust in advertising, this data reveals how radio’s audience communities offer advertisers a unique opportunity to build trust in their brand. 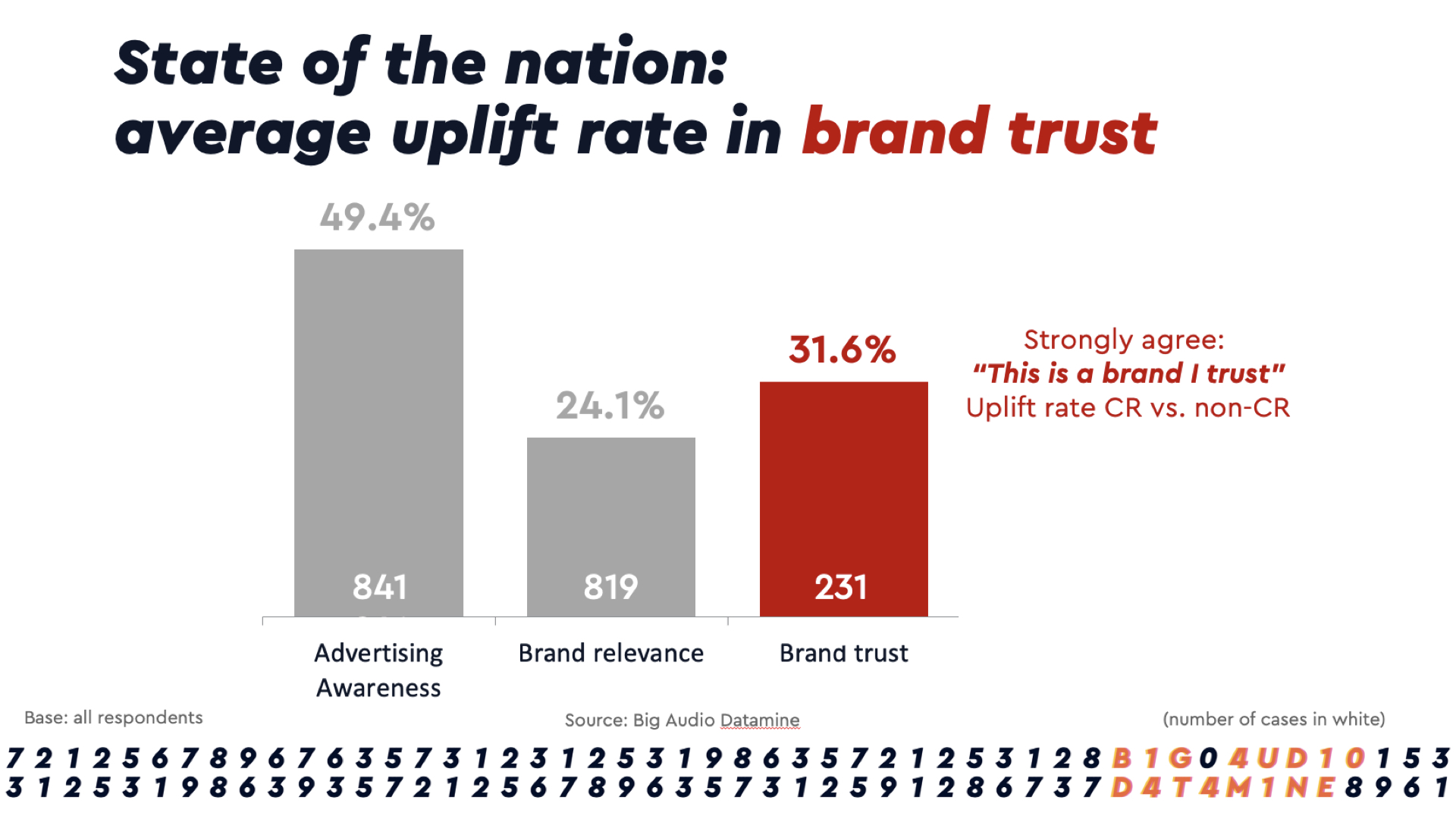 So far the data has shown us how radio can drive awareness and change the way people feel about a brand, but what can it tell us about how people act after hearing a radio ad?

Brand Consideration ("how likely would you be to choose <Brand X>?"): the results for brand purchase consideration are often the most eagerly anticipated in a RadioGauge debrief. The Big Audio Datamine contains purchase consideration information for 823 campaigns, and the news is good. On average we see an 18% uplift in brand consideration for people exposed to radio campaigns compared to the matched sample of non-listeners. That's a very encouraging result. 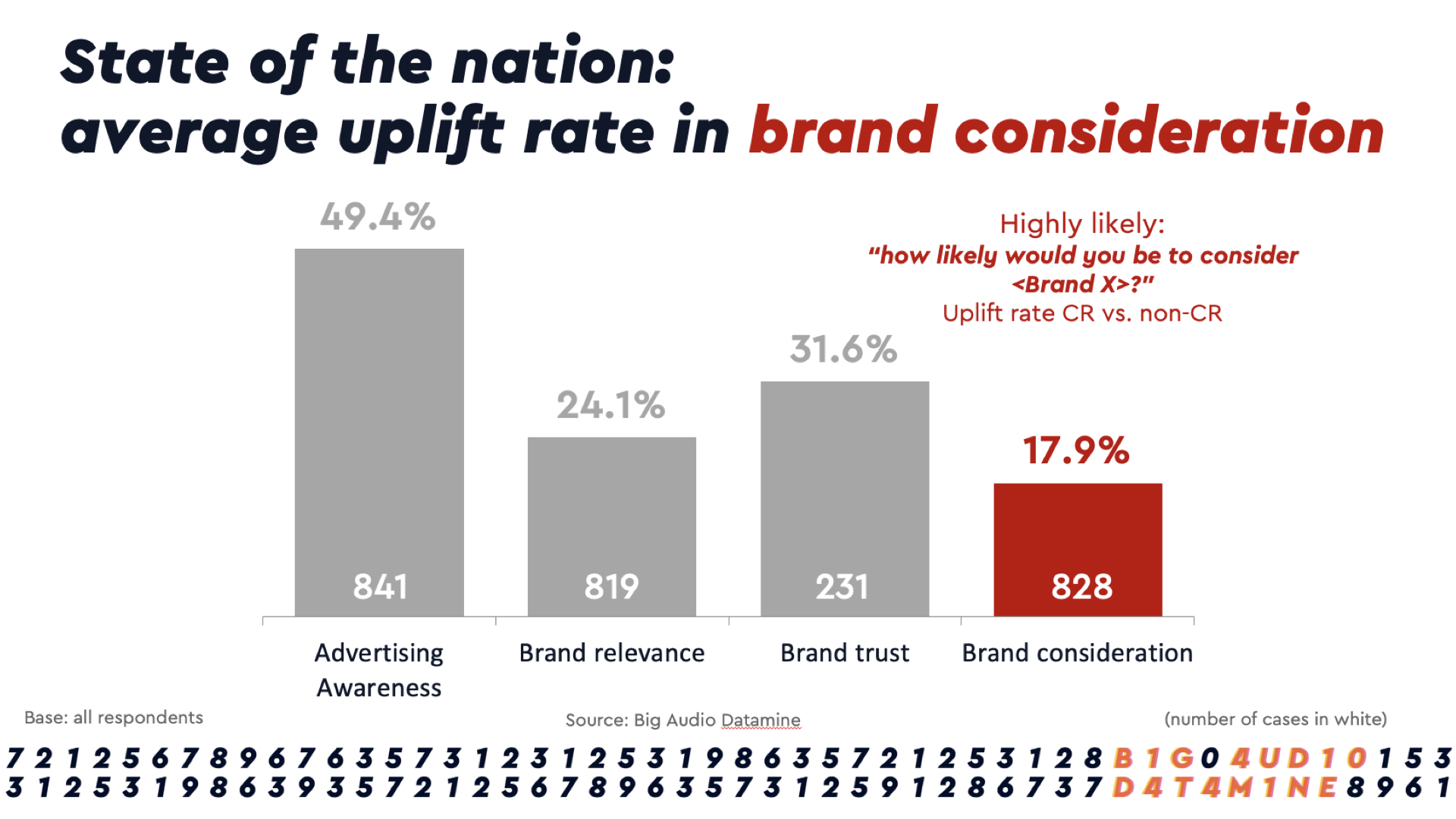 Ad Response: the final measure of radio advertising effect we'll look at here is the average level of claimed ad response. The importance of ad response is of obvious interest to performance marketers, especially those working within a Direct To Consumer (D2C) online environment. Ad response questions were added to the RadioGauge survey in 2016 and data for 291 ad campaigns has been amassed so far.

The data includes information on the number of people who claim to have either searched for a brand online or visited a website after hearing an ad on the radio. Amongst people that remember hearing an audio ad when we play it to them, 21% say they subsequently undertook a brand related online search and 19% visited an advertiser's website.

These numbers convert to an audience response rate of between 4% and 5% based on the total universe of commercial radio listeners exposed to a campaign. We think this is a response rate that most direct response advertisers would be very pleased to achieve. 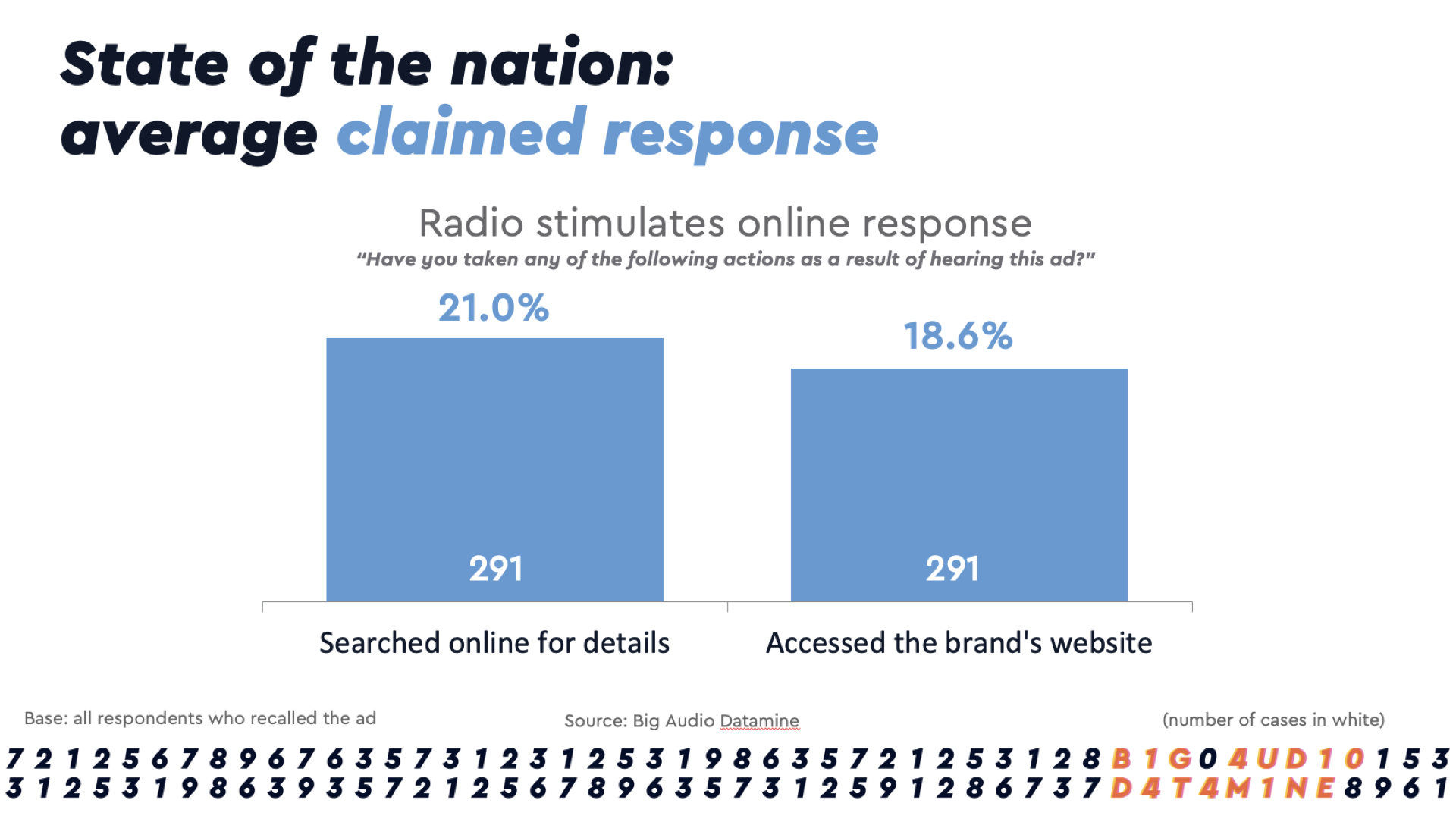 Colourtext has used a combination of quartile segmentation and regression analysis to identify the characteristics most associated with high performance radio campaigns. This is still a work-in-progress but early results have been encouraging.

The analysis reveals a range of attributes that influence radio campaign performance, which can be categorised into ‘fixed’ and 'variable' factors. In general 'fixed' factors tend to lie beyond the control or influence of an individual ad campaign, such as a brand's product cateogry, its size relative to competitors and the duration of its typical purchase cycle.

In contrast, the 'variable' factors are those that an individual ad campaign usually can influence – such as radio schedule planning weights and the mix of creative elements within an audio ad. This makes the variable factors more interesting when considering how to optimise radio advertising performance. Let’s begin by looking at what we’ve learnt about the role played by creative audio elements in campaign performance. 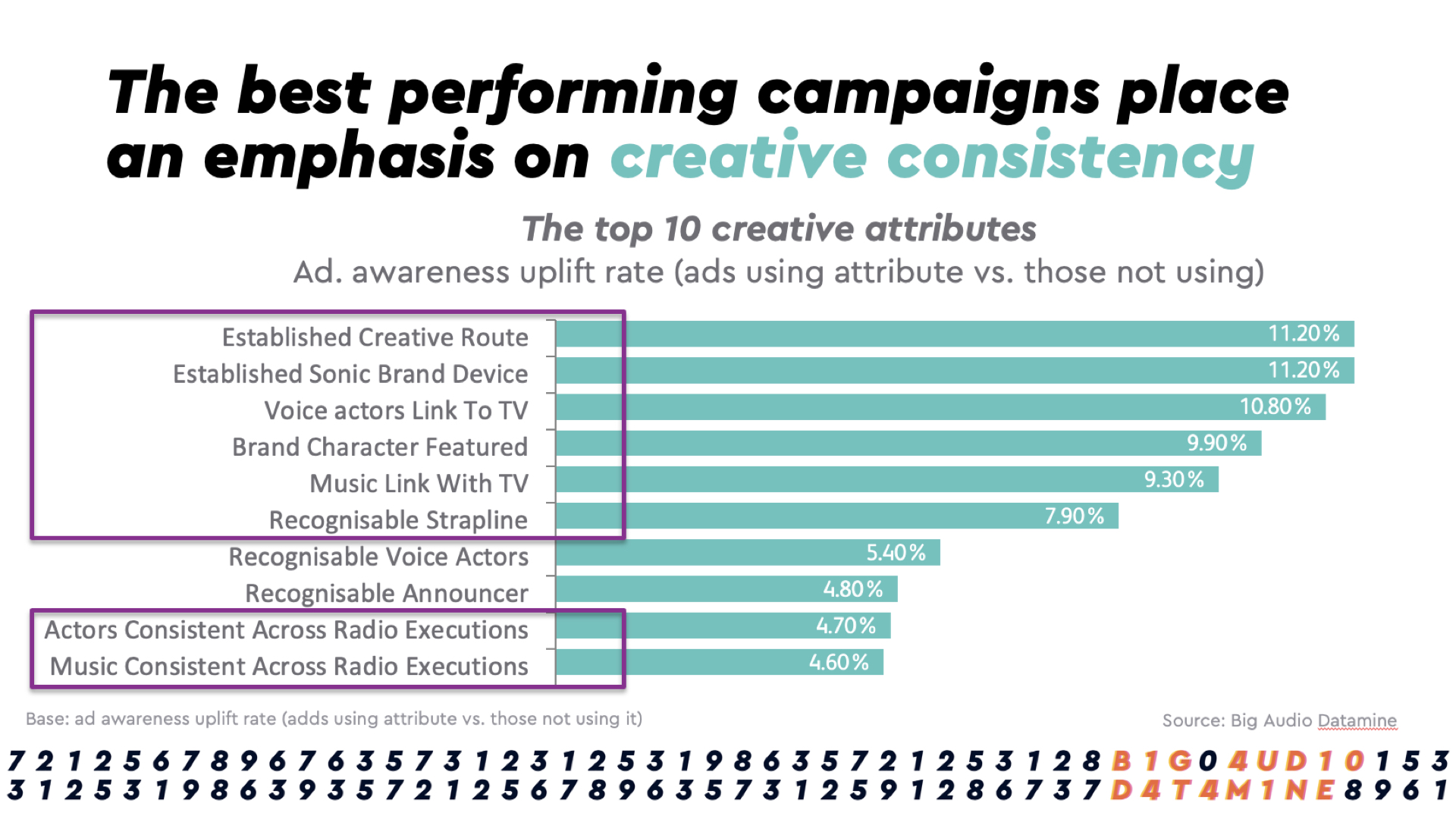 Eight of the Top 10 creative attributes relate to using distinctive audio elements such as music, voices, straplines, brand characters or a sonic brand device. The emphasis here seems to be firmly on the value of consistency in an audio creative context. Campaigns that apply these creative audio elements consistently over time, not only across radio executions but linked across other media channels too, achieve the best results.

This insight is reassuringly consistent with previous Radiocentre research. It also aligns with what we know about radio's unique ability to popularise new music by taking a song from obscurity, making it familiar through mass exposure then elevating it to broad popularity.  This last point connects neatly to what our meta-analysis has revealed about the role played by campaign planning factors in successful radio advertising.

Radio campaigns that focus on building reach deliver stronger effects: for this part of the analysis Colourtext segmented campaigns in the dataset into quartiles based on their relative size or 'shape' in terms of campaign planning factors like GRPs, OTH and Reach etc. 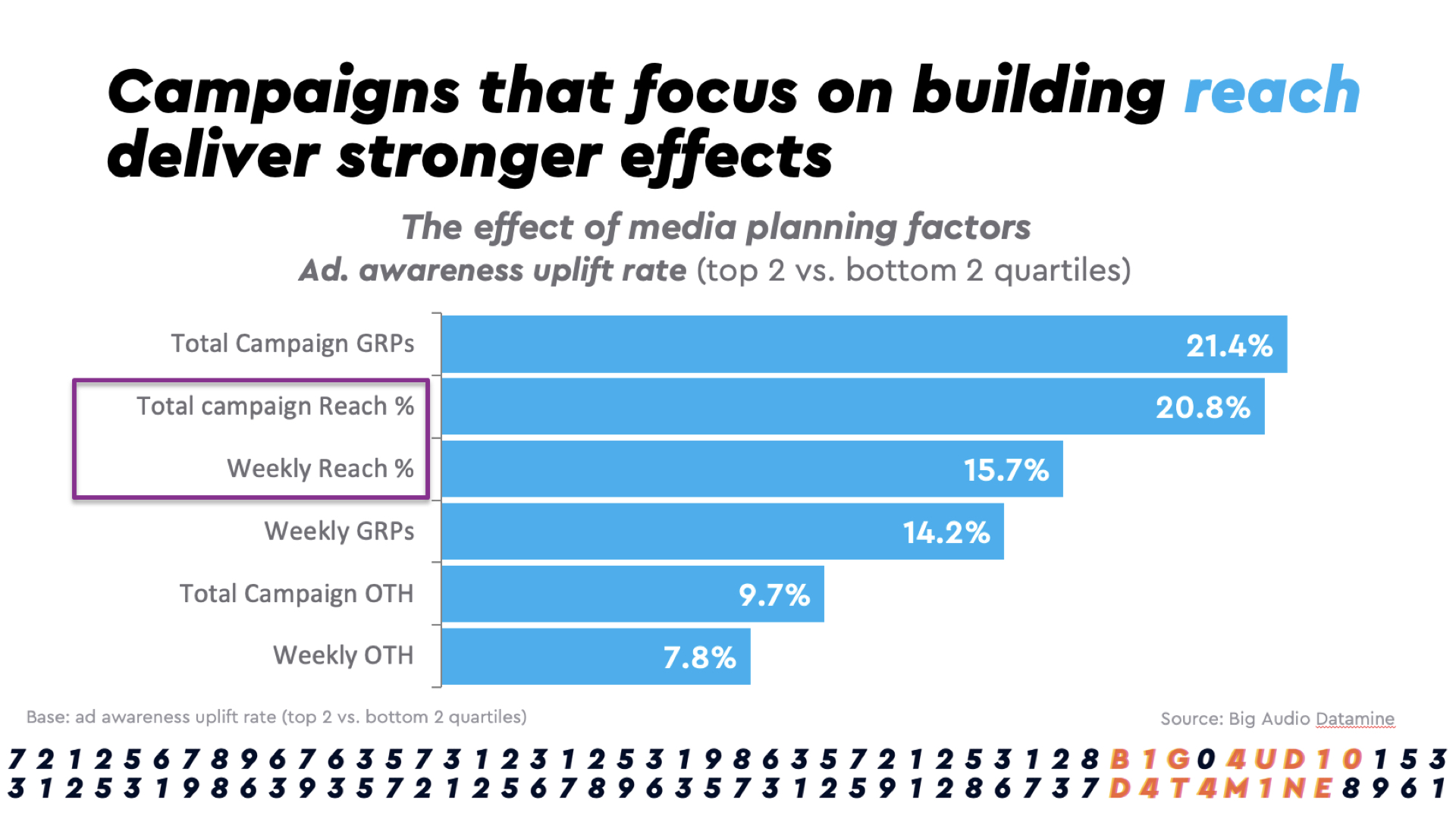 This data makes clear that reach is the driving force behind better campaign performance. Given that radio has for many years been synonymous with frequency planning this finding may surprise people. However, it strongly echoes insights from the RadioCentre's previous ROI Multiplier study. Simply put, the more people your radio campaign reaches the better your brand outcomes will be.

The Big Audio Datamine project is a huge undertaking and has only just begun. Here's a summary of what it's doscovered so far:

These headlines seem like good sense to us and appear to closely reflect advice from Professor Byron Sharp’s book, ‘How Brands Grow’ - target all category buyers with your advertising and use brand assets consistently across media and over time to enhance brand salience and mental availability.